Online dating can be scary, challenging and something to get use to doing. It can also be outright hilarious meeting different people with flavorful personalities. Who hasn’t had a date with Mr. Musty or Ms. Peculiar? It was only right for there to be a series to capture all the memorable moments of dating in 2016. The Tinder Games does just that.

Press Pass LA got the chance to speak to the creators of the popular, new webseries. , two dynamic content creators who formed Bruliet Media, decided to pen this series incorporating some of their own experiences with the world of online dating.

PPLA: When did you start Bruliet Media?

Bridget: Juliet and I started Bruliet at the beginning of 2015. We were working together producing at OWN digital and wanted to create something that wasn’t quite on brand with OWN! We had this idea for The Tinder Games and one day, I walked up to Juliet and said, “Today we’re meeting at Formosa Cafe after work and writing”. And that’s how it all began.

PPLA: What did you do before starting your own production company?

Bridget: Before starting our production company I worked at 1st Ave Machine as a digital content manager and strategist, at OWN digital as a post-production supervisor and producer of the Imagen award-nominated “Rosario Dawson: Who Am I” and as a production coordinator and assistant for various companies. I also spent years working professionally as a youth soccer coach in the Midwest and assistant managing a retail store ‘Title Nine’ in Chicago.

Juliet: We were working together at the Oprah Winfrey Network creating original digital content. Before that I’d been working as a production accountant and coordinator on a number of films between LA and NM. Before that, I worked in a totally different field as a whitewater guide in the Grand Canyon. Bridge has a similarly different background. We weren’t the typical film students turned film workers that you can find in LA.

PPLA: Is it easier or harder to work with your friend?

Bridget: It is so much easier in most ways! Enjoying being together all day is an important factor when you’re working on projects that are just the two of you spearheading. Writing with Juliet is like breathing. We just flow so well together. Neither of us write as quickly or with the story structuring fitting as seamlessly separately. I mean we both write a significant amount for our full-time jobs, but together everything works 10x better and faster. The hard thing about working with your friend is when one of you doesn’t do what you’re supposed to and there is no “corporation” or “boss” to keep you on task and motivated. You have to figure out how to not only be their best friend, but also be their cheerleader, taskmaster and sounding board. That balance can sometimes be difficult until we decide to “just be friends” for a night and hang out without any shop talk.

Juliet: I think for us it’s easier. We’ve got complimentary ways of working, and we usually like the same movies and TV, so creating isn’t a contentious thing. We’re good at talking out pretty much anything if we have differing opinions on how to move forward. It doesn’t hurt to be able to trust the judgement of who you’re working with.

What is rough, particularly for me, is staying on task. When it’s a passion project, it’s easy for it to take a back seat to work that pays your rent. I tend to blow through deadlines and forget tasks, which Bridge is an expert at.

PPLA: How did you come up with Tinder Games?

Bridget: We came up with The Tinder Games by writing what we knew! While this web-series is a hyper-real workplace comedy, these stories are all based in reality of something that happened to one of us while we were on Tinder, trying to find love and booty calls. We loved telling other people about our outrageous tales, occasionally exaggerated, and we thought it would be a series we wanted to see!

Juliet: We were both on Tinder, having the best/worst time engaging with the ridiculousness that goes with it. Dudes are actually pretty freaking funny…sometimes.

PPLA: I’m assuming you both have been on Tinder. Are these episodes based on actual experiences? If so, tell me about the most memorable interaction you’ve had on the site?

Bridget: These are all based in some realm of fact. The 80-inch mirror is something a guy once led with on Tinder. SO FUNNY. I couldn’t stop laughing. We never met in real life, but we sure had some good conversations. Probably my most memorable was having a guy over to hang out at my house and he had just been at the gym (stinky) and brought food to heat up to eat! So bizarre! Some hilarious moments that night for sure, especially when he told me his mom made the food. Talk about a mood killer!

Juliet: Oh what you see in the episodes is based mostly on either our personal experiences or those of our friends! We did embellish a few for comedy’s sake, but not by much! We had to change some details to protect the innocent! I think my most annoying Tinder date was with a guy who kept trying to convince me that men were scientifically proven to be 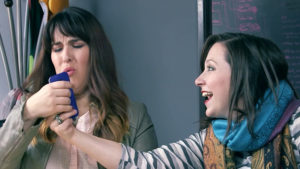 funnier than women. I mean, he was right. He made me laugh and laugh.

PPLA: I’ve seen a lot of moments in Tinder Games that I have experienced when dating online. What do you hope your audience gets from your series?

Bridget: I hope that they realize that Tinder can be a wonderful and hilarious place, that not only guys are the ones making inappropriate comments and messages, and that having some bad / lame dates off of Tinder doesn’t mean the right someone isn’t out there for you. I met my husband on a dating app, and later in the season Charlie is going to meet someone on Tinder that she’s going to date for awhile. So we hope people laugh, enjoy our oddball co-worker and boss and keep on Tindering!

Juliet: A taste of how ridiculous the experience can be, especially for women. At several points, I’ve deleted that app, because of the amount of bullshit

PPLA: What is next for Bruliet Media?

Bridget: Up next we have a few exciting collaborations. We are working with Marele Entertainment on a digital series RSVP that is having a sponsored read through at Hot House later this month. We also co-wrote a horror-comedy short film with horror writer Andrew Saxsma that will be premiering in the fall as a short film and broken in a digital series. Season 2 of the Tinder Games will be shooting this fall. And we are producing content for startups and small businesses to help them reach new clients.