Getting to Know the Personalities of the Now Hear This Festival

Midroll Media’s first annual podcast festival Now Hear This was a total success with every seat filled for many a performance. For any podcast fan, there is something magical about seeing your favorite comedians, historians, and storytellers in person doing what they do (usually through your ear buds) on stage in a relatively intimate setting. Check out a couple of our favorite moments and interviews below.

I Was There Too – Matt Gourley with Marc Maron

If you don’t know much about Matt Gourley, you’ll want to change that after seeing and hearing him in an interview. During this particular show, the funny guy was subtle with his humor due to his meandering conversationalist guest, Marc Maron. The two joined forces on the Casper stage, kicked off the set with a few jokes about mattresses, then got to chatting about Maron’s scene in Almost Famous:

On the Almost Famous fight scene: “Cameron Crowe did not give us direction, there was no stunt work, it was just sorta like go for it.”

On his character in the film: “The producers were like, ‘you’re the perfect asshole’” 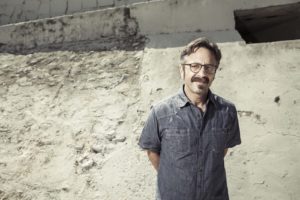 On acting: “I don’t really call myself an actor, but I can do a role if it’s in my wheelhouse. My range is like AAARRGH;SLKDFW;ELKFJ to ehhhhh…neurotic to angry, I can manage it.”

On making “Lock the gates!” part of WTF’s theme song: “Well that’s a good question, I’m not sure how that sound montage occurred – do you remember Brendan [McDonald, producer of WTF] – yeah you? Oh it was Brendan, my producer.”

On preparing for interviews: “I tend to freak out…I don’t over prepare. Sometimes with musicians…I’ll run through their catalog as opposed to preparing questions, as if somehow that’s supposed to carry me… I just want to start a conversation, I don’t care about questions. If it happens, then you’re in that.

On being a cat guy: “I’m not ready to be that out”

On working with Cameron Crowe: “The great thing about Cameron Crowe is that he went out of his way. I only had one little scene, and when we were on set, I was an unknown comic at the time, that guy, we ate dinner that night, he sat with me and my wife, you know the director of the movie… he’s a really sweet guy.”

On the appeal of podcasting versus live performance: “There are a few reasons why I love it, one of the reasons is because I’m able to put out my own content once a week whereas doing an improv show at UCB is really fun, but you kind of get the same types of people and the same crowd coming…so I think being able to put out something and have it reach a lot of different types of people is really validating and it feels good as an artist to do something that can last.”

On advice for young comics: “Don’t be afraid and keep trying. It can be a really intimidating thing at first. When I first started taking improv classes I was a lot younger than everyone in my classes and I felt like I didn’t have anything interesting to say compared to them…and then you realize everyone is interesting.”

On being female in a male dominated landscape: “Especially in podcasts, it’s pretty supportive, I mean you definitely find people who will shit talk anything, but I think that there are so few female comedians, still in the podcasting game…but there’s been a lot of support, I feel like people are excited to see a girl doing what the guys are doing. It’s not like shocking that a girl can do it anymore and it’s nice to be getting into things when that’s already true, like I don’t have to pave the way, so that’s nice! It’s funny though because I’m still so outnumbered, like on Comedy Bang Bang it’s rare that I’ll be on with another girl even though there are so many funny women that are around, there are just more guys. It’s just the odds are that there are more guys available that day to do the recording; I don’t think it’s based on any sort of sexism. But yeah, you realize you’re standing out. When we were on tour Scott (Aukerman) would introduce each character, describing the characters’ traits before bringing everyone out, and he’d just be like ‘she’s’ and everyone knew it was me, it was kind of funny.

On even playing fields in podcasting: “As an artist, you’re kind of waiting for people to say yes you got cast in this part or do this project, and to be able to be like ‘I have control, anyone can do it’, that’s really empowering.”

On favorite podcasts: “I love The Moth, that’s one of my favorites, I like This American Life, what else? I listen to The Savage Lovecast [with Dan Savage], he’s amazing and I learn so much from him! But yeah, The Moth is one that I love and I will go see live in my neighborhood when they come around. I hate storytelling myself; I’m a really poor storyteller. I’m like ‘there was a car crash, EVERYONE’S FIIIIIINE!’ just like no buildup, but I love to go and watch someone tell a story really well and see that vulnerability. It’s very different, I mean it’s not so different compared to what we’re doing with improv because when you’re on stage there’s a connection there, but just to watch someone tell a personal truthful story is really cool.”

On forming Wild Horses: “I was invited to do All Jane No Dick…and they were like do you have an all girls improv team and I was like ‘yes!’ and then I was like okay I have to figure out who my improv team is, so I invited those three girls [Erin Whitehead, Mary Holland, Stephanie Allynne] because I knew we’d have a fun trip, and it was like a free trip to Portland…we ended up having really great shows together, so we were like ‘we should keep doing it’ and it ended up kind of becoming it’s own thing, so yeah, I’m so happy about it. It’s fun to have an all girl group, especially with travel, I think it makes it even better. We went back like a year later and looked at our Instagrams and realized that the four of us had been hanging out a few different times and didn’t really realize that we were like a unit, so it took a while to realize we were friends, but we did.”

On shifting With Special Guest on screen: “It would be a waste not to explore that further because there’s so much that’s already been established.”

On her total number of characters: “…Well it’s over a hundred at this point because I’ve recorded a hundred for my podcast and then adding in Comedy Bang Bang that’s like twenty, so yeah I guess 120! I usually don’t revisit, but every once in a while I’ll bring a character to Comedy Bang Bang and get to explore it more deeply.”

On comedic influences: “Growing up I loved SNL so much and that was like the main place I got comedy really, so Chris Farley, Adam Sandler, David Spade, that era of guys was my favorite era and definitely my formative period of like realizing I’m funny. As I’ve gotten older, Amy Sedaris, Sharon Horgan is someone I really admire, she created Catastrophe, but she’s done a bunch of things and I’m like obsessed with her, um Chris Lilley is incredible. Those three are my favorite right now.”

On introverts, extroverts, and ambiverts: “I was really shy growing up and I think I would have said that I was an introvert, but I know that I’m not. I think I’m an extrovert in general and I’m okay with talking to people and I don’t feel to overwhelmed by that, but I think part of that introvert extrovert thing is like finding how much time you need by yourself and I do love to be by myself and just like not talk for long periods of time, so I think I get my little bursts, and then I go home and I’m like nothing is happening, so yeah I guess I’m a mixture of both. I recently took a personality test and I guess I’m an extravert according to that, and also so is Obama…but I do feel like I walk the line.”

On feeling naturally funny: “With improv I was really in my head when I was first going through classes. I think I had a natural ability to be funny, but I don’t think I had the natural confidence to believe in that so in classes I would like leave because I was younger so I wouldn’t hang out with everyone, so I’d go home and just really thinking over everything I did…so it took me a while to get over that. When you’re starting you’re doing so many shows for like two people, I mean literally two people will be in the audience and they don’t like it or whatever, so you kind of have to get over that and realize that confidence rule everything. Like I said about the supportive audience here, even if only a few people showed up, it would be okay, and we’re going to have fun and they’re going to be a supportive audience, and that all comes from years of really sucking in front of two people and doing shows in bars where people are like talking over it. You have to get through all the hard stuff and eventually they’ll stop talking.”

On comedy versus drama: “As a comedian…whenever I have to do a dramatic scene, it takes a lot more focus for me. I love acting [versus improvising], but for me when I’m doing a dramatic scene, that’s where I have to really put every bit of myself in it, it’s not as natural, but it’s really fun.”

On her favorite character: “I usually just get obsessed with one for a period of time, so right now I’m still obsessed with Big Sue who just loves pizza. It was just a voice that I was doing around the house and I was like I have to do something with this because it’s so stupid.”

If you weren’t able to make it to the event, or just want to relive it, check out behind the scenes photos here and read our preview piece for a snippet about each podcast. Never stop learning!