“Girlfriend” takes over the Kirk Douglas Theater in Culver City, and it’s not sorry.  Lead by actors: Ryder Bach and Curt Hansen this musical and poignant look into “that summer” after high school but before college explores the threshold between finding yourself and shedding your childhood.

Set to fun jams, it’s a sure thing to look around and see our fellow audience enthralled. “Girlfriend” which is directed by Les Waters and choreographed by Joe Goode leaves its you in anticipation of where its two protagonists will go with their lives and future desires. 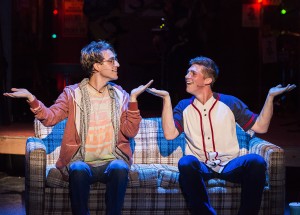 The story itself picks up after high school graduation in 90s Nebraska, when Mike declares it a “Happy New Year” and proceeds to stake his claim on his new year resolutions. We then meet Will the high school all-star whose given his number and mix tape to the unassuming and imaginative Will.

The boys proceed to develop a friendship over the next 90 minutes that delves into exploring your true emotions, and sexual desires, along with the difficult and sometimes oppressive expectations of your community and the society around you. Set to funky music, up beat dance scenes, and a terrible drive-in movie you just can’t shake. “Girlfriend” delivers a great performance of what it’s like for young men to express their differences and desires in modern society.

“Girlfriend” runs at the Kirck Douglas Theater from July 12th to August 9th.  Purchase your tickets while they last.