PaleyFest was in full swing at the Dolby Theatre this past weekend for its annual weeklong celebration of television. The event is named after CBS Television founder, William S. Paley and produced by the Paley Center for Media.

The goal of this incredible occasion is to bridge the gap between fans and their favorite series with exclusive Q&As with cast and crew, and special advance screenings. The fact that the Girls panel for PaleyFest happened to fall on International Women’s Day could not have been more appropriate. Girls is certainly a series that everyone has an opinion on, and love her or hate her, creator/star Lena Dunham speaks to feminism with an edgy eloquence.

Moderator (and Girls Executive Producer) Judd Apatow introduced the evening’s newest episode, “Tad & Loreen & Avi & Shanaz” to the audience’s immense delight. Below is a condensed version of what transpired next:

Judd: “When you’re up in the middle of the night, and something really bothers you on Twitter, what is it?”

Lena: “Well, I stopped looking at my own Twitter….whether you have a million followers or whether you have seven followers, because we all deal with the complexity of people being able to say things to you anonymously behind the veil of the Internet, which is that you think you can take it like ‘Oh my god it’s so funny, someone called me a fat cow who deserves to be dragged through the streets!’ but it does affect you internally.” [laughs]

On politics, and changing your mind:

Lena: “I don’t regularly re-read interviews with myself, but I found something on my computer and I said the words ‘I’m not a very political person’ which is something that I can’t even relate to and it’s just amazing how much you can grow and change in five years. I don’t relate to that sentiment in any way and I think I thought that’s what you were supposed to say like ‘I let my art speak for itself’, but the fact is that I really do care deeply about politics and about things that are happening in the United States right now—particularly to women, particularly to women of color, particularly when it comes to reproductive rights. We don’t set out to be didactic or to turn our show into a Trojan Horse to tell you who you should vote for, but the natural truths of politics come through in what we’re doing. We tell stories, not just about the world we live in, but about the world we want to live in.”

Allison: “The way you do it is so brilliant, because people have real conversations about it and get into it and have different perspectives and different opinions, so it’s not didactic at all, because you have people contesting certain opinions and changing their mind and growing and I think that’s what makes it seem relatable, because people rarely come out of the womb with these perfectly hatched ideas about how things should work.”

Lena: “I love to see people say ‘I didn’t understand before, now I do’ like certain celebrities come forward and say ‘I didn’t identify as a feminist, because I didn’t know what it meant’ or ‘I’m sorry I said something ignorant about what that was happening in Ferguson, I hadn’t done the proper research…I think it’s a really big gift to the world…changing your mind is a natural and very healthy part of human development. If I look back at some of the ideas I had about the way the world worked when I was twenty-three and the show started, I feel, I wouldn’t say shame is the word, but I feel so grateful for the things that I have been exposed to.”

Lena: “It’s a really amazing thing to see shows have the power to change the way to think about the big social issues of our time, and if our show can in any way contribute to that, it’s an amazing thing.” 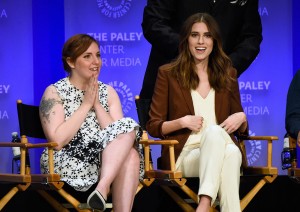 Allison: “First of all who doesn’t want to be friends with them?” Lena: “We’re so happy that Girls and Broad City can exist together, and we never want there to be any sense of competition because we adore them and there has to be room for multiple shows about women in their twenties.”

On what she hopes the show will accomplish:

Lena: “Like a campsite, I will leave all the characters better than I found them!”