I’ll be the first to admit it – I didn’t read “The Giver” in school. A regular fixture on most any kid’s summer reading list, the award-winning book by Lois Lowry has for years been a beloved classic belonging to many adolescents favorite books list.

But I wasn’t one of them, opting to read perhaps a Collier or a Rawls over the Lowry novel. But we all know movies based on books never live up to its literary source (Fight Club excluded), so that void in my childhood memory gives me an unbiased perspective for which to review this film, a film that I can confidently say stands on its own as a powerful, moving cinematic experience.

The Giver is about the persistence of memory, and a young man’s journey to bring memory back to a land that has lost it. Brenton Thwaites gives a strong performance as Jonas, a young man living in a world in which emotions have been replaced with pleasantries, and free will replaced by order. Much like Gary Ross’ Pleastantville, the film uses black and white cinematography to show the monotony of the world, and it isn’t until Jonas discovers he is the chosen Receiver that we begin seeing the world in a new color.

Jonas is trained by The Giver, played brilliantly by Jeff Bridges, an elder who is the only person to know the truth of the world as it once was. Once Jonas learns that his people are being subjugated, he will stop at nothing to save his people from the power of totalitarian normativity.

Director Philip Noyce does a fantastic job at setting up the world. From the onset of its stark cinematography and rigid characters, we see a place that is in serious need of a savior. But the film takes a few missteps along the way, as the all-seeing elders, commanded by Meryl Streep, are blind half the time to what their chosen Receiver is doing. As wise a moral the story is trying to tell, there’s a certain naiveté that is persistent throughout, until an ending that is all too abrupt. 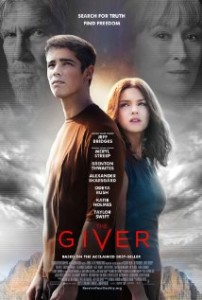 Despite the film’s simplicities, the quick 94-minute journey we take with Jonas as he learns the power of feelings does show us a glimpse at a wonderful story of living life to its fullest. This story is one that I will now fully enjoy as I finally pick up the book and give it the reading it deserves after all these years. Three Stars.

In theaters, August 15th. Watch the The Giver trailer here.