This Monday, Glamour magazine celebrated the 25th anniversary of its Women of the Year awards at Carnegie Hall in New York City.

Without a doubt, the biggest moment of the night came when Caitlyn Jenner, a transgender advocate, won a Woman of the Year award. Jenner recently became a woman and there has been a lot of controversy surrounding her ever since. Presenting her with the award brings not only validation to her cause but the transgender community as well. 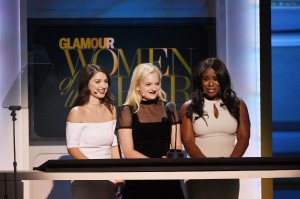