Hollywood is an industry well known for supporting leftist ventures that range from AIDS awareness projects to programs that exhibit the support of the homeless and indigent. These causes have become such chic industry exploits, that it’s become almost an iconography to see some celebrity, or many, attached to any one of them.

The question we as audience to the red carpet are all faced with when this happens, is whether or not these star-studded events that raise awareness for such causes, exalted by way of bright lights and gala attire, lay claim to any genuine opinions given by that of the attendees.

It’s easy to expect the best of celebrities – to see them at a charity fundraiser which operates to raise social conscientiousness, and ponder the true hearts and intentions being shown. I can assure you, however, that at the GO Campaign’s GO Gala on November 13th, the support was genuine.

The GO Campaign is a fundraising establishment, founded by Scott Fifer, functioning to support projects that encompass education, healthcare, and environment. They have reached out to, and successfully improved the lives of over 50,000 children, funded 128 projects in 28 countries, and are currently involved in funding a music education program in Paraguay, along with supporting D. Cynthia Maung in Thailand, to provide birth certificates in Northern Refugee camps. What’s more, is that 100% of the monies given to the funding, go directly to the causes which the campaign is supporting. There are no said fees, or catches that usually come with organizations like these.

The order of the evening was to Honor one Ruchira Gupta, an abolitionist, journalist, filmmaker and human rights activist. Gupta has worked tirelessly for the last 25 years to end sex trafficking. She has provided education, training, and notes on justice to empower girls and women who are culturally affected by the sex traffic dilemma. And tonight she is being lit to perfection with Rose petals sprinkled along the floor, and Bollywood dancers hailing her reputation, in the renowned Marquesa Room at the Montage Beverly Hills.

Such trying social justices are not often easy partaking. The fact remains that it takes  real commerce to meet the passion that endures in such projects, and has endured since the organization founding in 2006. So once the lights flickered on to showcase the red carpet entrance the press and media were aflutter with anticipation as to who would arrive first. One of the first guests was actress Rosanna Arquette, of Desperately Seeking Susan, After Hours, and Pulp Fiction.

It’s fascinating to see an actress of her caliber and beauty, honor this event. She’s slowed down in the last few years, and audiences haven’t heard a lot from her. I asked of her involvement with the organization, to which she generously replied: “Being friends with the owner. But more than that, honoring heros like Ruchira Gupta is just as important as the lives GO has touched.” And one by one, guests started rolling in.

The flash and flare of the guests was contagious as music from the deejay played on. There was definitely an air of camaraderie among all attendees, from the celebrities, to the high rollers with their high-heeled wives and their crisp resonating colognes. The sea of faces ebbed and flowed to a pulsating frenzy, while Scott Fifer, Founder of GO had this to say of the Campaign’s main target: “There is nothing more important today than children. They are the future.” It makes perfect sense that this would be headlining quote for the press. Most of the causes projected by GO have to do with children. Other celebrities felt the same way.

Chad Lowe, of ER and Pretty Little Liars fame stated “The reason I am here is because we are righting the good fight on a grassroots level. And to have all money go to strict purposes. I want to expose my daughters to how fortunate our family is, and what it means to give to others.” This, an honest, and important statement. It’s certainly refreshing to hear of successful, working actors who are putting forth work that isn’t directly attached to their fame or success. Lowe continues: “It’s important to build schools and education. That’s something that is taken for granted. Ultimately it’s the children it reaches, from those across the seas to my own daughters. Being here is a small gesture to give back, and [GO] is already doing great things.”

Camryn Manheim, of The Practice and Ghost Whisperer echoed Lowe’s sentiments: “It’s all about giving back. I had to come tonight because it’s all about being selfless” She pauses, “which I guess is actually pretty selfish because it feels wonderful to do things for other people. These are all like minded people with one goal, which is to give a voice to those who aren’t heard, so to give back is what it’s all about.” Genuine words from a genuine celebrity. In fact, everybody that showed up seemed authentically ecstatic to be in attendance and it seemed that  everybody there seemed to know each other. It was truly a gathering of companions getting behind great ideas – with the help of big spenders to see their ideas through. 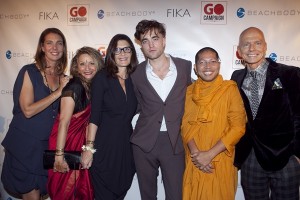 Thankfully, organizations such as the GO Campaign are in existence to show the world what Hollywood is really made of – the tide is turning and hopefully, with the help of Scott Fifer, his crafty crew and their generosity toward philanthropy, the industry is pointed upward – with the help of the shining stars like the ones in attendance last Thursday.