God’s Not Dead took the world by surprise following its March release. Despite the film’s small $2 million budget, Scott said it earned $9.2 million in its first week in theaters, finishing fifth in the U.S. box office. The film earned another $8.5 to $9 million the following week, holding on to its fifth place spot and eventually jumping to fourth in U.S. box offices. 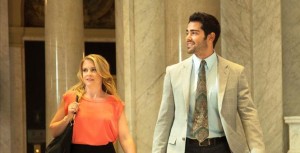 God’s Not Dead 2 centers on a Christian public school teacher (Melissa Joan Hart) who appears in court before a jury and judge for answering a student’s question about the similarities of the teachings of Jesus to those of Martin Luther King and Mahatma Gandhi.

“What I love about this film is it’s about standing up for what you believe in, and having the ability to be tolerate others for what they believe in” says Melissa Joan Hart.

“My faith is very important to me so it was interesting for me to be on a set where every day starts with a prayer. It’s important to start the conversation about religion and state, and I’m glad this film does just that” explains Robin Givens.

“Creating this film was a leap of faith. My wife and I were both teachers in Michigan so we have a lot of experience with religion or lack thereof in the school system.  The goal with this film was to bring the conversations forward. We wanted to find actors known and unknown that were capable of telling the story as well as bring truth to the performance” says [Director] Harold Cronk.

“I learned so much being in this movie and the reason I wanted to be a part of this movie was to open up the conversation about the role of religion in our society in an increasingly secular society. I got to understand the Christian perspective a lot more. Playing an attorney was an absolute challenge for me. I learned so much about historical evidence proving that Jesus, the man actually walked this earth so it was a challenge on a lot of levels and I enjoyed it” said Jesse Metcalfe.