Godzilla is not the problem with Godzilla. In fact, when the King of Monsters is on screen it’s hard not to say this is the best visual portrayal the big guy has ever been given on film (hard not to beat guys in rubber costumes of course).

The film is easily at its best when giant monsters are wreaking mayhem across the screen but unfortunately this film just doesn’t have enough of it. Godzilla follows the story of Ford Brody and his father Joe who after 15 years are still trying to figure out the cover-up behind a nuclear reactor meltdown in Japan that claimed the life of Mrs. Brody.

As they soon discover, a secret organization, known as Monarch, has been covering up the existence of a gigantic beast and when it finally hatches it begins to unleash destruction wherever it goes. Now an ancient beast known as (SURPRISE) Godzilla has awoken from his slumber to re-balance the scales.

Godzilla is a lot like last summer’s Man of Steel. The things both movies do right (i.e.: the visuals, the battle scenes and a few solid performances here and there) they do really right but ultimately both films are bogged down by slow pacing, unlikable characters and under-written heroes.

The movie initially tries to build up the story the right way. Through the first act there is a clear rising action, with a few decently paced scenes to keep the audience interested and just enough kaiju to keep monster fans satisfied for the moment. Unfortunately, once the film enters the second act and we finally get to the full reveal of the big man himself the movie inexplicably cuts away for no reason and the audience is left, for lack of a better term, blue-balled.

In fact the rest of the movie plays out more or less the same. Every time the film feel like it’s about to kick into overdrive, with a giant monster battle, the movie for whatever reason goes back to the boring subplot involving the main character played by Aaron Taylor-Johnson. Audiences probably knew they were in for a lot of Zzzz’s when our hero’s name was revealed to be Ford Brody (never give your lead two last names). There’s nothing wrong with making the humans more important than the monsters in this genre; you don’t want kaiju overload of course.

The problem is if you’re going to do this you got to make these characters and their story interesting, not just run-of-the-mill doomsday genre archetypes. In fact, the only interesting character, who I will not name, they killed off in the first 30 minutes. Nothing wrong with creating suspense and teasing your big monster either because generally speaking that’s how you should do most monster films (i.e.: Cloverfield, Jaws, Alien, etc).

You got to eventually get to a payoff and there just isn’t enough of it here. Yeah, sure, the five minutes audiences get of Godzilla doing Godzilla things is pretty damn amazing but so are lap dances and both are short and tease the hell out of you.

The funny thing is the story has very little to do with the King of Monsters. In fact, he’s only the third most important part of the story. It’s truly sad because director Garrett Edwards clearly understands how to create a cool monster fight scene. Much like last summer’s Pacific Rim, a classic kaiju fight is one-part reality, three parts WWE wrestling match. 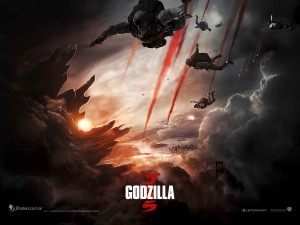 Once again, when this is happening the movie is easily at its best but Edward’s need to follow these bland, unoriginal characters dooms this film to matinee levels. The movie is worth a watch for the big screen effect of seeing Godzilla large and in charge alone but simply put there just isn’t enough of this to recommend a full-price viewing here. The new Godzilla might go down as the most frustrating film of the summer but fans of the genre will probably still appreciate what little there is of the King of Monsters in this movie. This said, you may be still better off saving your money.