THE GOLDBERGS AT PALEY CENTER: YOUR TV TRIP TO THE 1980’S

It was a trip back to the 1980s with the cast of ABC’s hit comedy series The Goldbergs Monday night and PressPassLA was along for the ride! The evening kicked off its festivities with a special cast photo opp with iconic ‘80s movie vehicles, the Ghostbusters Ecto-1 and a DeLorean.

Red carpet reporter Patty Gopez was on the scene at the Paley Center for Media in Beverly Hills for “The Goldbergs: Your TV Trip to the 1980s” and got to walk down memory lane with cast of the show.

While there are a ton of amazing outfits worn by her character Beverly, Wendi McLendon-Covey insists that there is no way she would steal anything from wardrobe. However, one item she does love: a “Special-made orange jumpsuit that’s bedazzled in all the right places, and it has enough give to it that you could wrestle your own son to the ground if you need to.” As stylish sister Erica, Hayley Orrantia talked about her favorite ‘80s fashion, which include “floral Doc Martens” and “high-waisted shorts.”

When asked about the one thing they would bring back from the ‘80s, Hayley answered with “‘I Wanna Dance With Somebody’ by Whitney Houston.” Taking a page from his onscreen sis, Troy Gentile would also like to bring “that dance-y, groovy music” back – like his favorite ‘80s jam, “‘Holiday’ by Madonna.”

Funnyman Jeff Garlin got quite cheeky with us and dished that the one thing he could bring back from the ‘80s was “[his] virginity.” When asked about his favorite ‘80s memory, George Segal was “really [more of] a ‘70s kind-of-guy” so he “doesn’t have a specific memory of the ‘80s… but it was a good time!” 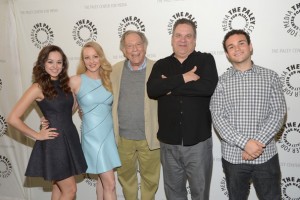 The rest of the nostalgia-filled night included a screening of the upcoming episode entitled “A Wrestler Named Goldberg” airing May 6th, as well as a fan-participated Q&A session. The latter part of the program included the five cast members, joined by Creator/Executive Producer Adam F. Goldberg and Executive Producer Doug Robinson. It was then that Adam Goldberg answered the question on everyone’s minds: Will there be a season two? The Goldbergs creator accidentally let it slip, admitting that the show will indeed be coming back for a second season, though he insisted, “It’s not official!”

The Goldbergs airs Tuesdays at 9 p.m. on ABC.