A beautiful Tuesday night at the Greek Theatre brought out fans that have listened to the Goo Goo Dolls, Daughtry, and Plain White T’s throughout the last 20+ years.

The show started off with the alternative rock group Plain White T’s most known for their song ‘Hey There Delilah’ which became widely popular in 2007. Their first time at the Greek Theatre was a hit! Front man, Tom Higgenson, shared his lead vocals position with lead guitarist, Tim Lopez, for ‘Rhythm of Love’, another hit from the band. This shared lead vocals concept is a similar dynamic to headlining band, Goo Goo Dolls.

Daughtry was up next. The American rock band, fronted by Chris Daughtry of American Idol season 5, put on a lively performance. They played their hits such as, ‘Waiting for Superman’, ‘Over You’ and ‘It’s Not Over’. Chris Daughtry also dedicated the song ‘Home’ to the troops overseas and the song ‘Wild Heart’ to his wife. It was a very touching moment followed by some energetic moments, getting the crowd up on their feet and dancing. 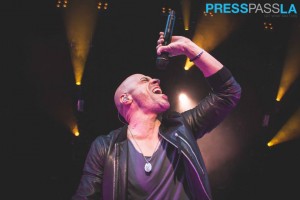 Goo Goo Dolls finished the night with their well-known hits from the 90s and 00s. Guitarist and vocalist John Rzeznik and bassist and vocalist Robby Takac are the only members left from the original band but that did not stop them from putting on a great show! The crowd loved hearing their chart topping hits ‘Iris’, ‘Slide’ and ‘Black Balloon’. They finished the show with an engaging encore of ‘Sympathy’ and ‘Broadway’.

Check out the PHOTO GALLERY here.