Robert De Niro and director Martin Scorsese will reunite with the cast of Goodfellas for a special screening of the newly remastered film to mark the 25th anniversary of the film that will close the Tribeca Film Festival in NYC this April.

A cast Q & A will be hosted by comedian Jon Stewart and will take place post-screening at the Beacon Theatre on April 15.  Cast members have not yet been confirmed but film festival organizers say actors Joe Pesci,  Ray Liotta, Lorraine Bracco and Paul Sorvino are all expected to attend, schedules permitting. 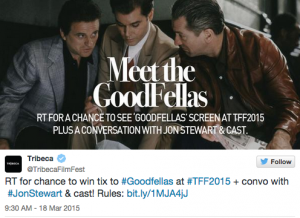 “It’s wonderful to see one of your pictures revived and re-seen, but to see it closing Tribeca, a festival of new movies, means the world to me,” Scorsese told reporters.

Tickets for the Goodfellas screening will go on sale for the general public on March 28th. Their is a pre-sale for American Express cardholders beginning on March 23rd. To purchase tickets, visit Tribecafilm.com. You can also WIN them! Yes, you read that right.

The festival has decided to give three lucky film fans and their guests the chance to attend this momentous TFF 2015 Closing Night experience by simply retweeting!  From Wednesday, March 18  through Friday, March 20, movie lovers can retweet one of the official giveaway tweets from @tribecafilmfest for the chance to win two tickets.