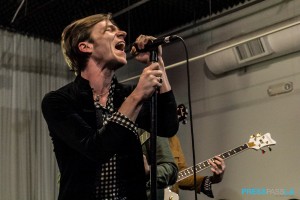 I had the privilege to see an acoustic set with Cage the Elephant about a year and a half ago on the rooftop of the Hollywood Tower.  It was a small crowd, middle of the day, very casual.  I have to admit, I didn’t know much about them or their music, but I thought it was an awesome experience.

Fast forward to today and Cage the Elephant was just nominated for Best Alternative Music Album at the Grammys!  To kick of their LA Grammy tour, they stopped by the Sonos Studios, where once again I was front and center, but this time I knew the words to their songs.

With a line literally around the block with fans trying to cram their way in, the room was buzzing.  As soon as they took to the stage, you cannot help but be transfixed on this band.  The stage presence is out of control and the lead singer, Matt Schultz, literally has moves like Jagger.  This band commits, through and through.  They play the favorites but keep you engaged with their new songs, and most importantly, it actually looks like they enjoy playing the music that they play.

Sonos Studios could not be a better venue for them either.  With what could easily have been an alternative garage band at some point, Cage the Elephant doesn’t need tricks or gimmicks.  It’s just them up there, and quite frankly, that’s all you need.