Wes Anderson’s The Grand Budapest Hotel is a treat for eyes and ears, a true cinematic masterpiece. By putting together one of the finest ensembles in decades along with some of the best cinematography since classic Kubrick, the movie is one that you will want to see again and again.

Anderson is one of the few modern directors that not only has a distinct voice but learns from each and every movie he has made in order to make the next one even better. “I did an animated film a few years ago and that was very different for us because we had to storyboard it then edit it before we even shot the movie. I think since then I’ve approached live action a little differently and it’s effected how I shoot my movies,” noted Anderson at a Q&A last weekend in Chicago.

Budapest tells the adventures of M. Gustave (Ralph Fiennes) head concierge at the Grand Budapest Hotel in the 1930s. Together with his lobby boy (Tony Revorlori) they navigate a small European country between wars. Along the way they run into a strange cast of characters including a rich Madame (Tilda Swinton, almost unrecognizable), a loyal attorney (Jeff Goldblum), inspectors (led by Edward Norton), thieves (led by Harvey Keitel) and villains (William Dafoe and Adrian Brody, both played to perfection). The plot itself can get convoluted at times but that doesn’t stop the film from being one of the most enjoyable movies to be released in a long time.

Using a unique color palette and shooting entirely in 35mm it is hard not to be reminded of classics like The Sound of Music and Raiders of the Lost Ark while watching the movie. Indeed, Anderson employs such a classic-style of directing that it instantly elevates the film well above any other popcorn movie currently released.

Like all Anderson films there is a lot of detail in every frame. “For this we actually had to create a completely fictional European country with a history to it that we set our characters in,” explained Anderson. “Though almost all of it, except for the miniatures, was filmed on location.” 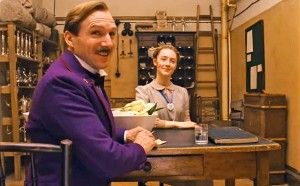 The Grand Budapest Hotel is one of Wes Anderson’s most distinctive films but it may also alienate those not used to his style. While it may not win audiences the world over during its theatrical release there is no doubt it will have a devoted cult following the moment it hits DVD and VOD. That being said, the movie should be seen in theaters to be truly appreciated. If it is playing near you, see it, you owe it to yourself to watch this movie.