GRANDMA: THE NEXT ERA OF LILY TOMLIN

For 80 minutes, I was led along an unstable journey of a grandmother and her granddaughter looking for hope in the new film, Grandma.

In the film, hope comes from scant monetary funds given to them from different characters along this journey in order to pay for an abortion for the granddaughter.  It is certainly an interesting and great Friday night movie pick! 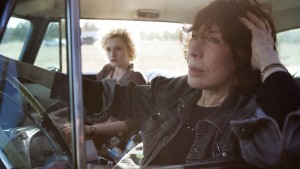 Grandma was very full of sarcasm and witty dialogue.  Speaking on making the film and the vibe while creating, Lily Tomlin shared, “It was so freeing that I didn’t realize how funny it was until I saw it with an audience!”  This story’s purpose had no intention to make a statement on feminism or abortion; however, the purpose is to simply tell a story from the mind of writer and director, Paul Weitz.  “It is very easy to loose track of the human beings in stories that bare upon social issues and to turn people into statistics,” he explained.

“I love how much the granddaughter is seeing of her grandmother without expecting what’s going to happen!”  Weitz noted passionately. He also shared, “I was really interested in how much Lily’s character had seen and also the idea that this is not a movie where there are characters who are in there seventies.  Like, they have a lot of life to live and they are still learning stuff and they are extremely vital.”

Though there was witty humor throughout Grandma, the film managed to grab an emotion at the end that gave the audience positive and optimistic thoughts for the future of the rocky relationships between characters.  The film captures an unfamiliar and different take on the personality of a grandmother and her relationship with her granddaughter.