After the rain subsided and southern California was back to it’s normal mild winter weather, the 20 Days of Grinchmas began. 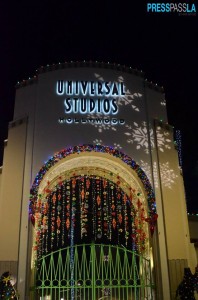 Los Angeles Mayor Eric Garcetti spoke on behalf of the L.A. tourism community, declaring Universal Studios a central component to its growth. He then proceeded to read the first-ever “Grinchmas” Mayoral Proclamation – in Seussian rhyme, of course – to all the Whoville citizens and over 200 L.A.U.S.D. students in attendance. This kicked off the tree lighting ceremony as lights illuminated the 60-foot tall tree with a fireworks display in the background and snow to top it off. 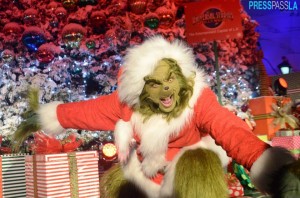 Various Grinchmas activities followed the tree lighting ceremony such as decorating gingerbread cookies and enjoying story time with Cindy Lou Who. Grinchmas features these activities all season long, including a Whoville Post Office where visitors can write their good deeds on a postcard and send it to the Grinch as part of the “Grow Your Heart 3 Sizes” campaign.

In return, Random House Publishing donates a book on behalf of the sender. As the kids wandered from activity to activity, Yvette Nicole Brown summed-up the event by stating, “You really become a kid again and the Grinch is as amazing as you’d imagine.”  Universal Studios Grinchmas runs on weekends from December 6-7 and 13-14. The Grinchmas celebration continues daily from December 19, 2014 through January 3, 2015. 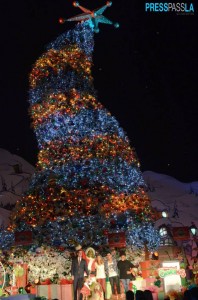 Check out our Grinchmas Photo Gallery!