GUARDIANS OF THE GALAXY BRINGS UNEXPECTED WARMTH TO MARVEL UNIVERSE

In what is guaranteed to be one of the biggest blockbusters of the summer, Guardians of the Galaxy is roaring into theaters on Aug. 1. Press Pass LA had the opportunity to attend the official press conference to hear more about the making of the film from stars Chris Pratt, Zoe Saldana, Vin Diesel and director James Gunn.

Pratt, who is more known for his television work on NBC’s Parks and Recreation, admitted that he knew he wasn’t a natural fit for the role. He said, “I guess — I didn’t — people probably didn’t see me. I’m not sure I even saw myself in this kind of a role.” In fact, Gunn didn’t even want him to audition. “We had screen tests of at least 20 people, actually screen tested at least 20 people of all, you know, big stars, you know, no names, looking for the right person because I really wanted somebody who could embody this character and take it beyond what was on the page in the same way Robert Downey, Jr. did for Iron Man, essentially. And nobody blew me away. Plenty of people were really good; maybe the people were great, but nobody blew me away. And this — Sarah Finn, our casting director really deserves the credit for Chris in a lot of ways because she kept putting his picture in front of me and saying, you know, what about this guy? Why don’t you meet with him? And I was like, the chubby guy from Parks and Rec?” However, it was Pratt who blew the roof off at the audition.The director shared, “within 20 seconds I was like, holy shit, that’s the guy. That’s who we’ve been looking for.” 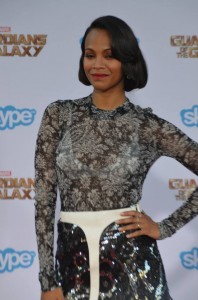 Saldana is no stranger to action films and sci-fi after starring in Avatar and the Star Trek franchise. She had a very specific idea for her character Gamora whom she thought would have trained in bullfighting. The mother-to-be said, “She’s a woman and she just has to be very seductive in the way that she tricks her enemy into falling into their own death. And I thought well that’ll be interesting, too. I’ve never done that. So when I told that to James, he thought oh yeah, yeah, yeah, go for it, go for it.” While Gunn was game for her interpretation, Saldana knew the stunt coordinator was going to be less than thrilled. The actress laughed, “It was hard telling the stunt people because they’re so hard and they think that girls are stupid. So when you walk in like into this testosterone driven like rehearsal place and you’re like well she does fencing and she’s a bullfighter, they’re kinda like *[email protected]%&!. But then they realize they didn’t really have a choice and they adapted it.”

One of the most stirring parts of the Marvel film is the soundtrack. Diesel was quick to point out how the music resonated with him and his young kids. Diesel explained, “The music — I’m singing the music every day so most of the time when I walk into an interview I go, I start singing, “Hooked on a feeling…” The coolest thing was my three-year-old son watching the movie and when “Hooked on a Feeling” comes on, he was at the edge of his seat and I’m watching and it’s the first time he’s ever gone to a movie — we’ve ever gone to a move together. Obviously, he can’t see Riddick or any of those other movies. So he kinda scoots to the edge of his seat and squints his eyes like this and he starts singing, “Hooked on a feeling, high off believing, that…” And watching him do that just melted my heart. So we listen to the songs at home. My daughter’s going, ‘Oooh, baby, give me one more…’ It’s remarkable how a soundtrack could be so important, so important to the storytelling.” 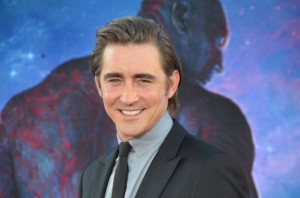 That gift of storytelling is placed back on Gunn who created a brand new world for the Marvel universe. It’s one that he’s extremely proud of. He summed up, “was, frankly, liberating. It was, you know, for me I think I would have had a harder time trying to fit into the regular, you know, Marvel scheme of things and this gave me a chance to take what I loved about Marvel movies and Marvel comics and create a whole new universe which is really, you know, what has been the most exciting thing for, you know, in my entire professional career.”

Guardians of the Galaxy opens nationwide on Aug. 1.