It looks like there’s hope for movies yet. Marvel’s newest installment, Guardians of the Galaxy, is proof that it is still possible for original properties to come to life in the hands of risky filmmakers and succeed. That says quite a lot about the current movie going public and should serve as a wake- up call for studio executives everywhere. People actually like originality.

And Guardians is nothing if not original. Hell, at times it is all out batshit crazy. But that’s part of why it works. The movie allows the constantly expanding Marvel universe to go into deep space and truly let its freak flag fly. Honestly it is hard not to get giddy at some points in the film as director James Gunn meshes surreal landscapes with witty dialogue and one of the best soundtracks of the year.

Guardians is, without a doubt, a punk rock version of Star Wars and takes the sci-fi genre back to the weirdness that it once was in the mid-1980s. Gunn had a big task when it came to making audiences care about a talking tree and a badass raccoon but not only has he accomplished that, there are moments where they steal the whole show. Voiced by Bradley Cooper, Rocket Raccoon is a fast-talking, wise-ass bounty hunter with a twisted sense of humor. Strangely, even surrounded by the best genre actors around, the CGI Rocket carries some of the film’s heaviest scenes. The same can be said for Groot who, voiced by Vin Diesel, manages to speak volumes by only saying his name.

Unlike other comic book movies this one isn’t afraid to push the envelope and sometimes get a little silly. But even when it’s silly the audience buys into it because it’s a part of the universe they have created. Gunn took advantage of that fact but adding in the kind of characters that wouldn’t normally show up in modern comic book movies. The most surprising of these is, of course, the one that shows up at the end of the movie’s second stinger. But shhh spoilers. 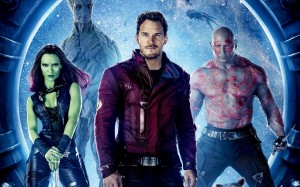 A lot of movies have come out this summer but few have the heart and, dare I say it, soul of Guardians of the Galaxy. Not only is it one of the best movies of the summer it is one of the best movies of the year. Its success gives Marvel the power to do pretty much whatever they want now that they have proved to both fans and each other that they can do it well. See it, see it now. Why aren’t you watching it yet?