GUYS WITH KIDS GETS UNDERWHELMING RESPONSE 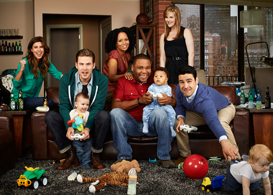 The new NBC series Guys with Kids premiered last night, a comedy created by Jimmy Fallon and Charlie Grandy (The Office). It may be too soon to say they should stick to their day (or in Jimmy Fallon’s case) night jobs, but after last night’s premiere it is exactly what I said.

The idea is simple and is summed up in the title. The show opens with the three main characters played by Jesse Bradford, Anthony Anderson, and Zach Cregger each with their babies strapped to them in a bar. Being in my mid-20’s, I could see how this show would be funny to my age-group. I can’t help but think in just a few short years that this is what life will be like for my brother and closest guy friends. Although I would hope they’d be smart enough to not bring their babies to the bar, something tells me that situation isn’t too far off of reality!

With that being said, there were many lack-luster moments in the show. A broad comedy about parenting leaves room for endless jokes, and I feel NBC and the creators really dropped the ball by not zeroing in on key moments as often as they could have. Overall, it seemed like there was just a lot going on without giving the audience a chance to find the standout jokes in the humorous situation at hand. Sure, a kid on a leash is always funny (if not sad), but as a television viewer I need a good one-liner in there to get a real laugh, not just the sight of you walking your kid like a dog.

The funniest moments in the show came from Zach Cregger (Nick) who in the show is married to Jamie-Lynn Sigler (Emily). His quips and comedic timing were just a bit more on point than Bradford (Chris) and Anderson (Gary). Actresses Tempestt Bledsoe (Marny), and Erinn Hayes (Sheila) are also supporting roles on this series, who each play their part well as wife and ex-wife respectively, but nothing extraordinary stands out about either of their performances. If the premiere is any indication of what the rest of the season is like, we may not be seeing a season at all. If NBC does give the show a shot, I will continue to follow at least the next couple episodes to see if the series gains the momentum we all know the comedic creators are capable of.

Visit Guys with Kids on NBC