It’s Halloween! Time to watch some scary movies. What? Scary isn’t enough? You want hardcore unabated brutality and gore? Done. What? You also want to be made to think about the most dour and heinous parts of the human condition? Done. Here’s my ‘Top Ten Most Brutal Mindf#$%s.’

Rule of the list. 1. One film per franchise. 2. The film has to be viscerally brutal, not just suggestive. We need to see the blood and sinew. 3. The film must also have a competent message wrapped in its brutality. ‘Hostel’ is gory, but it has the depth of a jello shot. 4. The film does not have to be classified as horror, so long as it is horrifying.

10. Saw (2004) – This film helped bring the torture genre more mainstream, though it was hardly the first, as you will see. But it created a franchise, that, like most other horror franchises, stayed around way too long. Saw also made a horror icon out of Tobin Bell as ‘Jigsaw’ who could make a comfy living just doing the horror convention circuit. The intelligence of this film came from the reckoning Jigsaw created and a great twist that was pathetically derived from in nearly every other incarnation.

9. Cannibal (2006) – Based on a true story about a man who placed out an ad for someone to eat him, director/writer Marian Dora decided to make a film about what that would have been like. I only know one other person that saw this movie, and we have seen a lot of crazy, but we nearly had to turn this one off. If anyone else has seen this movie and would like to join our survivor group please call me. This film has the record for the longest castration scene ever. It’s the only one I have ever seen, but I am dead sure it is the longest.

8. High Tension (2003) – Maybe it’s some kind of castration fear (see above), but a female antagonist scares the crap out of me. This film starts with two college friends visiting one’s family in the country when a maniac kills the family and kidnaps the girls. From here it gets interesting, kind of like Fight Club as a gore horror film.

7. Inside (2007) – Brutal, brutal film about an expectant mother who is attacked by a woman who is after her unborn child. But, like most of these films, there is a purpose and a meaning to the violence. Keep this in mind while watching a pregnant woman being cut…nevermind. This film should have one of those warnings for expectant mother on it.

6. The Exorcist (1973) – The greatest horror film of all-time is ranked #6? How? That’s like sticking Jerry Rice less than #1 on any list! But here we are, 2014, and film has gotten far more gory and realistic with make-up and effects. Not to take away from this masterpiece, but just for this list, we gotta make room in the abattoir for other films. Worthy of note: I took a girl to see the re-release in theaters back in 2000. Nice, christian girl. Pretty sure I damned our relationship to hell with that.

5. Audition (1999) – This film starts out innocently enough, you meet these characters, they meet each other, relationships form, then they’re all chucked into a proverbial pit of razor blades. I could do an entire top ten with these same specifications just for director Takashi Miike. Other films of his like Gozu, Visitor Q, and Ichii the Killer that are all disturbing with their own style, but ‘Audition’ is the only film to make me physically gag. Is that a good thing? Not sure, but it is definitely a thing.

4. Antichrist (2009) – I saw this film in an independent theater in Los Angeles. One usually finds a fairly enlightened, film-loving and film-savvy viewer at such places. At the beginning of the film there were about forty of us. Then, as the film went on, and Lars Von Trier’s brilliant requiem for misogyny became even stranger and gorier, people began to file out. At the end of this journey that I have and only need to see one time there were exactly 13 people left. I’m prepared to join these survivors with the folks who also managed to make it through Cannibal.

3. Cannibal Holocaust (1980) – Admittedly, this film makes you think of little else except ‘How the [email protected]#$ did someone film this?’ Banned in more countries than the UN, offensive to religions that can agree on nothing else, and more unnecessary animal slaughter than any metaphor I could come up with. Hell, the filmmaker did such an awesome job marketing this as a documentary he was actually dragged into court for murder. He of course re-produced the actors in court. They even had to reenact scenes in the film in court to show how they had pulled off the effects. This type of marketing would later be copied by the makers of The Blair Witch Project.

2. Saló, or the 120 Day of Sodom (1975) – The last film by Pier Paolo Pasolini, who was murdered under mysterious circumstances shortly after the film’s completion. Maybe he made the fascists (who he portrayed as rapists, torturers and murderers in the film) who ran the country angry. Pasolini was like a more politicized Lars Von Trier. Trier can be brutal while weaving complicated philosophies and morality. Pasolini is a bit less artsy and subtle, but just as brutal. A scalpel vs. a chainsaw.

1. Martyrs (2008) – The thing about lists like these, with multiple qualifiers, is that you are trying to find the best embodiment of all those qualities. A while back I did a list of the best buddy action-comedies of all time. I ended up with Midnight Run at #1. It was the best part of both worlds: great action, great humor, and a perfect buddy matchup. Really just a perfect film when combining those aspects. 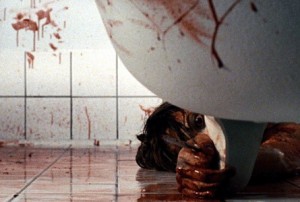 This is the same with Martyrs. Not only is this film likely more brutal than any other film on this list, the torture scenes are numerous and lengthy, but it does it all with a greater purpose. One that I will not spoil here, but there is a big and unexpected reason for all the gore and brutality in this film, one that really ma

kes the entire journey worth it, even joyful in a way. Because of this delicate balance of extremes that is done with near perfection, ‘Martyrs’ is the best of the brutal.

Honorable Mentions: Suspiria (1977) – Dario Argento masterpiece, best murder scene with a knife in film history. Imprint (2006) – Takashi Miike film that was originally done for the ‘Masters of Horror’ series but was pulled for its brutality. The Descent (2005) – Just a great horror film. Very, very, scary and well done.