Happy Halloween! You know what scares me? Clowns. Some would call me ‘coulrophobic,’ but I’ll get into that later. First, there is a new standard for the ultimate scary clown with Twisty the Clown of American Horror Story: Freak Show, so I thought I would write a list of ‘Top Ten Scary Clowns.’ This is for you, Clyde.

We all know that all clowns are inherently evil. Just like cats and mimes, they should be ostracized and avoided for the safety of humanity. Then why is the fear of clowns (coulrophobia) even a phobia? A phobia is defined as an irrational, illogical fear. You are right to fear the clown.

It is a completely rational action. Here’s a few good reasons why: Wait! We need some rules and to give credit to the likely ‘inventor’ of the scary clown, Mr. Edgar Allan Poe! In his 1849 short story Hop-Frog, a murderous dwarf dressed in motley takes revenge against the king who stole his land. Now the rules. First, I have to have actually seen the movie.

I’m not going to go back and watch the 100 or so crappy b-grade clown horror flicks that get rerun through the meat grinder again and again (see ‘Stitches,’ ‘Amusement,’ etc.). They all look the same. Second, one film per franchise. Wait, what? They never made Killer Klowns from Outer Space 2? Nevermind then. Just one rule I guess. Bring on the clowns!

10. Violator from Spawn (1994) – The movie was awful, and probably set back the comics to film genre back more than a few years. John Leguizamo’s performa

nce as the sadistic hellclown is the film’s only redeeming quality. This pick is based more on the potential of this character as he was presented in the comic books. Remake this with Michael Shannon and you’ll have a top three scary clown film. This applies to every movie and Michael Shannon. Cast him as a clown in any film and it immediately becomes better. Don’t you think Citizen Kane could have used an unhinged Michael Shannon as a clown?

9. Happy Clown/Sad Clown from The Last Circus (2010) – This movie is pretty twisted. Dark humor mixed with ultra-violent farce, like a mash-up of ‘La Strada’ and ‘Santa Sangre.’ Director Alex de la Iglesia’s film, like the excellent ‘Pan’s Labyrinth,’ is set around the Spanish Civil War. Clowns and fascists make a horrific combination, but the film is beautiful at times; however that beauty is always quickly subverted by the madness around them. Happy Clown – ‘If I weren’t a clown, I’d be a murderer.’ Sad Clown – ‘Me Too.’ Not a phobia.

8. The Zombie Clown from ‘Zombieland’ (2009) – Columbus (Jesse Eisenberg) is a very sensible young man. You need that and rules to survive the zombie apocalypse. Columbus’s sensibility extended to his fear and hatred of the clown. A fear and hatred that eventually came to a head when our hero faced the dreaded Zombie Clown. Not to spoil, but Colombus prevailed, albeit a bit comically, with an oversized circus mallet. Had the Zombie Clown also been a fascist or, heaven forbid, a Nazi, we would have the Nazi Zombie Clown, aka, the trifecta of evil.

7. Dr. Robert Underdunk Terwilliger aka ‘Sideshow Bob’ from ‘The Simpsons’ (1989-End of Days) – I know, it’s television. But ‘Simpsons’ transcends all media. Voiced by the most calming baritone not named Morgan Freeman, furthering the pernicious demeanor of this self-proclaimed ‘evil genius.’ He started out a clown on Krusty’s show, and after trying to frame him for a murder that was thwarted by Bart Simpson, Bob has vowed to kill Bart. Recently he seems to be rehabilitated. I think it is a result of the departure of his clown persona.

6. Jamie Lloyd (Jamie Stroud) from Halloween 4: The Return of Michael Myers (1988) – For some reason this film scared me more than any of the other Halloween movies combined. The first time for me was a harrowing experience, and I really connected with young Jamie (Danielle Harris) through her terrifying escape from her maniac uncle. But in the end instead of this experience steeling a pre-teen Jamie, it broke her and just like her uncle did as a young boy she dons the clown outfit and gets to killing. Is it nature? Or is it the clown?

5. Captain Spaulding from House of 1000 Corpses (2005) – Sid Haig received a Best Actor award at the 15th Annual Fangoria Chainsaw Awards for this role reprised from his equally excellent work in The Devil’s Rejects. It’s maniacal and even hilarious; he’s kind of like Slim Pickens if Slim Pickens were a homicidal clown. I chose ‘Corpses’ over ‘Rejects’ because the clown persona in the former is more prevalent whereas he’s just a psycho killer in the latter.

4. The Killer Klowns from Outer Space from Killer Klowns from Outer Space (1988) – This time the evil clowns are actually carnivorous aliens in this shlocky 80s cult classic. In a time when Freddy, Jason, and Michael were dominating the horror genre by bringing awareness to important issues like dream inception, teen sex at summer camp, and William Shatner’s horror face, brothers Charles, Edward, and Stephen Chiodo did their part by raising clown awareness.

3. The Joker from various Batman films – As a clown the Joker was always off-putting, but hard to take seriously with the Latin Lover Cesar Romero in the silly but fun tv series of the 60s. Even Jack Nicholson’s great performance was undone by Tim Burton’s overly stylized and emotionless design. Mark Hamill actually did a fantastic job in his voiceover work during the animated series and subsequent video games creating a darker and more dangerous criminal mastermind that the Joker was supposed to be. Then there was Heath.

2. Clown Doll from Poltergeist (1982) – I have written about this film before in a Top Ten about questionable films from my childhood, as the PG rating this film earned certainly tells about the times before PG-13. This was my first horror movie, and the possessed clown doll was the earliest source of boogeymen under the bed and monsters in the closet. Brilliant, because such a benign object like a child’s plaything was at its scariest when it was doing nothing but sitting there. This was the framework, just needed something to bring it all together. 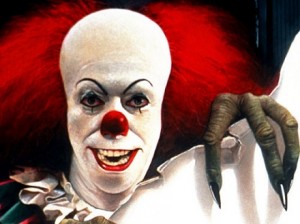 1. Pennywise from It (1990) – ‘We all float down here.’ Leave it to Stephen King to pioneer and outright create the model for the scary clown in this made-for-television adaptation of his novel. Pennywise is like Freddy Krueger as a clown, feeding off the fears of children. King even created the above catchphrase for Pennywise. Played by the versatile Tim Curry, who also scared us as Darkness in the Ridley Scott film Legend, and murdered us as Mr. Boddy in Clue.

It wasn’t just Curry’s magnificent performance, but it was the clown as a child murderer which played off the fear induced by the mass murderer John Wayne Gacy, who dressed as a clown for children’s parties. King has always had a knack for taking something innocuous and creating an Nth degree of fear and maliciousness underneath its layers, and Pennywise the Clown represents another King fear trophy along with overzealous fans, Plymouth Furys, and telepathic waifs.

What scares you? Tell us, maybe we will make a list dedicated to your fear! In the meantime have a fun and scary Halloween!