I relapsed last night. It’s not the first time and it probably won’t be the last. I could feel it happening; cool sweat droplets from my hair fell against my neck and I knew my cool girl exterior that I worked so hard on perfecting was coming undone. Everybody witnessed it. And I wasn’t even embarrassed.

It was during Where’s the Love that I could feel the 12-year-old teeny bopper inside myself creeping out. I held it together for most of the set, but by the time they performed A Minute Without You, I was waving my arms over my head and scream-singing along. I didn’t even care that the words spIilling out of my mouth were in complete contrast to the Misfits skull leggings I was wearing..

Hanson just does something to me. And it’s okay. I’ve embraced it. 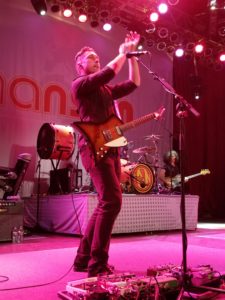 And I won’t lie. It’s hard being a 32 year old Hanson fan. It was hard being a Hanson fan back in the 90s, too, but one thing I’ll say for this band; they own their shit. And they praised us for it. If it wasn’t enough to bask in the glow of three very handsome blonde haired men (I’m not going to lie, Isaac Hanson is bae), Taylor thanked all of us for being fans even when it wasn’t cool.

Hanson is a band with some strong stigma and it’s been hard to shake. They’ve been branded by their debut song MMMBop for years, but it hasn’t stopped the trio from pushing forward while creating new and exciting melodies and lyrics. 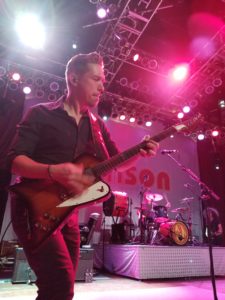 Drawing from Motown, modern pop and blues, Zac, Taylor and Isaac Hanson have built an impressive repertoire that their fans eat up. Luckily for us, they have no plans on stopping. With a new greatest hits album out — thoughtfully called Middle of Everywhere (an homage to their debut album Middle of Nowhere) — and the 25th anniversary of the band’s formation, these brothers are seriously on a roll. Not only have they released five new exclusive songs a year to their Hanson.net fans, they’ve dipped their toes in the beer business with MMMHops and created a craft beer and music festival in their hometown of Tulsa, OK.

Hanson has been busy and their fans have devotedly followed them. Speaking with some fans near the front of the stage, I asked how it felt being a Hanson fan for almost 25 years.

“It’s been a long road,” one girl says, fanning her face because it’s really hot in the House of Blues. “I’ve seen them ten times, their sets never get old. This is one of those communities where you start to recognize other fans and you become friends even though I live in Chicago and they live in Michigan or Ohio or someplace else. We’re territorial as fans; we love our boys. Their music is great and it makes me feel like I’m home.”

Home is where the heart is and my heart will always have a place for Hanson.