The story picks up right where the epilogue leaves off. The Cursed Child focuses on Harry and Ginny’s middle son Albus Severus Potter. Whew what a name to live up to, and the play focuses on just that. The eighth story nineteen years later is everything Potter lovers have been waiting for. The midnight release was widely attended all over the country, while the play itself is receiving rave reviews. We’ve all seen the touchingly emotional reunion of Emma Watson and her ‘older self’ portrayed by actress; Noma Dumezweni as they met during previews.

Harry Potter and the Cursed Child is currently running at The Palace Theater in London’s infamous West End. The producers are famously successful Broadway producers, and with it’s continued success down London’s golden row of theaters we can only hope to see it cross the Atlantic to NYC. JK Rowling has encouraged fans across the world to #KeepTheSecret as readers and viewers alike share in the experience of the story. We won’t detract from it’s secrets here at Press Pass LA, but urge to pick up a copy if you can’t make it to the West End this year.

JK Rowling has graciously relaunched Pottermore.com this year and added insider tidbits of Harry Potter and The Cursed Child, rich character back stories, and more insight into Britain’s Wizarding lore. Not be be outdone by the ninth story she has also included a rich history of the American school of witchcraft & wizardry Ilvermorny. Complete with a full founding story that traces back to Salazaar Slytherin, along with four houses and Native American magical influences. Sorted into Hogwarts? Try Ilvermorny, and look more in-depth into the upcoming ‘Fantastic Beasts; and Where to Find Them’ due out this November. The Wizarding world is as full of history as our own muggle history books tell us we are. Find your wand, learn about the Japanese. Brazilian, or African Wizarding schools. You might even recognize a witch or wizard from one or two who were important to the original Harry Potter series.

You’ve read the above warning now go, scat if you haven’t yet read or seen it. For all our fellow bibliophiles who no doubt inhaled the new playbook in about 59.2 minutes we are here to discuss all things Potter. Stop us now if we’re wrong, but we’re pretty sure the world shed a tear at the mirrored lines to Albus Potter from his father Harry as he was afraid to rush into the pillar that leads to Platform 9 3/4. Molly Weasley’s words of wisdom meant so much to that little orphan boy; unbeknownst he was about to make friends for the first time in his life. To hear him deliver it to his son was writing gold. Tears, pools of tears. The story evolves as we see Harry grappling to connect with his son Albus, who is very like and yet very unlike him. 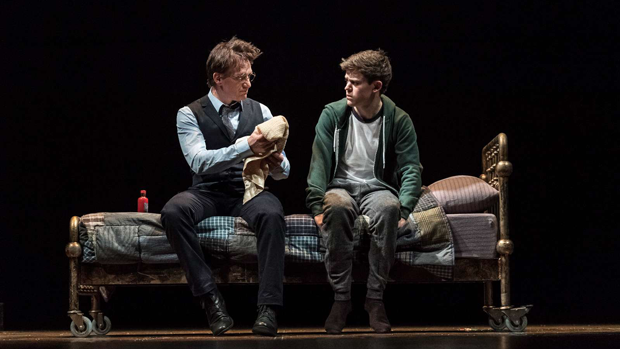 As the book continues it’s interesting to see Harry, Ron, and Hermione’s interactions with wizards from their childhood who are now their equals. McGonagall remains the best teacher created at that school. Who wasn’t rooting for her as she walked in on Scorpius and Albus in the library while re-iterating well if “I didn’t see you, I didn’t see you.” As she clutches the marauders map and disregards the footprints that so clearly de-mark Albus and Scorpius to be up to no good. It was slightly disappointing not to see one of Harry’s kids have a go with the map though. We’d really like to think Lily would have a mischievous streak and get up to all sorts of hijinks, map in hand.

The play complete with stage directions is one of the most concisely written plays, we’ve ever read. As we journey back to Hogwarts at the beginning we couldn’t help but love the sorting hat’s newest ditty’s on not just one occasion but several! Seems to make up for Harry and then Ron making us miss out on the hat’s rhymes for more than a couple years. Moving through the play towards the end, it was a shock and gross factor to learn that Voldemort had had a daughter with Bellatrix Lestrange no less. Ugh, spare us that gruesome picture, we’re still trying to rinse it out of our minds. The plot then follows her obsession with her father, rightly so, and her misuse of two very conflicted little boys. The friendship between Albus and Scorpius is touching and very much like life. As we grow you never know who your children will befriend and become because of it. It’s a touching message of acceptance, as JK Rowling  strives to prove in all her works, that love above all is the winner. We loved the time traveling here at the office and couldn’t help but think of The Flash as his time paradox has been all over the internet recently. How fitting that it should end Albus’ adventure with where Harry’s journey only began. Maybe we will get the James and Lily backstory we’ve been waiting for all these years…maybe not. But if Harry Potter and the Cursed Child is our return to his world, then we don’t mind waiting another nine years to see back inside the Wizarding world once again. In the meantime, we look forward to meeting Newt Scamander this November! Thank you JK Rowling for your magic.