Though many people call this a contemporary take on the Cinderella story, I’m not sure why. Hateship Loveship  is awkward to watch, and not in the charming way.

Kristen Wiig plays Johanna, the unadorned nanny who comes to the aid of a family after the woman she cares for passes suddenly. The new job is as caretaker to teenage Sabitha, (Hailee Steinfeld) whose mother was killed in a car accident and who now lives with her grandfather (Nick Nolte). We quickly learn that Sabitha’s father, Ken, (Guy Pearce) a recovering addict was driving drunk and high and is responsible for the death of her mother. He soon returns back to the motel he bought with intentions of renovating in Chicago, but not before writing Johanna an unassuming note thanking her for being there for his daughter. The timid Johanna we know relatively nothing about pens a response to Ken, which is conivingly intercepted by Sabitha and best friend, Edith (Sami Gayle). The two snicker at their evil genius and craft a response, which quickly becomes an email correspondence leaving innocent Johanna smitten by an oblivious Ken.

After an indeterminable amount of time, Johanna decides to pack everything and head to Chicago. She more or less breaks into the motel, only to find Ken drugged up and passed out on the floor. This doesn’t deter her, and she sets right to work scrubbing the grubby room. When Ken finally comes to, Johanna looks at him expectantly to the rejection, “What are you doing here?” What ensues is an uncomfortable progression of unnatural and hard to believe encounters between the two.

The first physically intimate moment is soon after Johanna catches Ken doing a line of coke off of the toilet seat… Not only does the last half hour feel ridiculously rushed, but the events which unfold leave us wondering, what was director Liza Johnson trying to accomplish?

Though we were treated to a bit of Wiig’s acting range in Bridesmaids, it was interesting to see her in a truly dramatic role. Her performance as Johanna is quality, however her character is just plain confusing. She speaks very little (which could have spoken volumes if other factors had played out well), and there is minimal backstory. Simply put, we can’t decide whether or not to root for her, frankly, because we don’t know her. 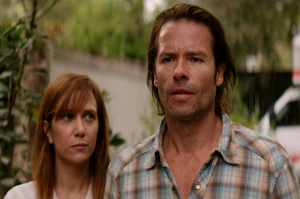 With a stellar supporting cast including seasoned actors like Guy Pearce and Nick Nolte and it-girl Hailee Steinfeld, surrounding A-list Kristen Wiig, we just had higher expectations for this film. We are left unsure whether to Hate or Love it.