This weekend I had the pleasure of attending the spectacle that was the flagship event of the “Hatsune Miku Expo”, a live performance by Hatsune Miku herself at the Nokia Theatre downtown. A friend who was familiar with Hatsune immediately asked me, “Did it feel like the future?” 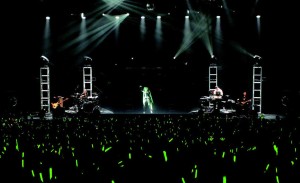 Now for those of you who aren’t familiar with Hatsune Miku, the virtual and Holographic Japanese Pop Star, I’ll make an attempt at explaining her existence starting with her inception. Hatsune Miku isn’t so much an individual performer as she is a force. Created by using a single voice actors’ vocal samples along with a Yamaha voice filter (think auto-tune on steroids). The company who developed her not only began to create original content around the persona, but the community adopted her and using a Vocal Pack released by the original company began doing the same. Quickly looking through the web not only surfaces tons of official Hatsune Miku content, but a myriad of fan made songs and content as well.

In addition the community adoption, she started to perform around Japan garnering her even more popularity. She is, in herself, a pop star and one of the biggest pop culture icons in the Japanese culture from the last decade. Now what does a performance of a holographic Japanese pop star feel like? 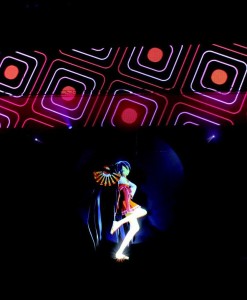 It feels energetic, loud and fun—very fun. I’d like to think of her performance as an EDM performance brought to level 11. The visuals are absolutely stunning, and her holographic form is perfectly lit while brining the crowd through a hefty catalogue of songs each with their own dance routines, and outfits to boot. Not only that, the music is done live, and the supporting bang was quite good in combinations. Sonically it’s an eclectic mix of J-Pop and J-Rock, it’s all very light but the tunes are catchy and something you can move to.

It’s these light, fun tunes and the technological marvel inspired by her very existence that’s brought her here to Los Angeles, all the way from Japan. She’s opened for Lady Gaga and been remixed by Pharrell, hell she’s even performed on Letterman (google it for yourself). Though I left the experience pleasantly surprised with faint J-Pop tunes playing in my head—I wasn’t entirely sure if the USA is ready for something as big as Hatsune. In a culture that seems more focused on the persona than the actual music (look at any celebrity gossip site), Hatsune might be a bit too much for the WalMart crowd to swallow. 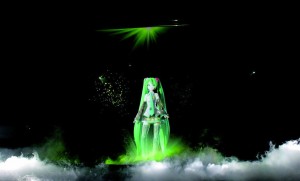 Going back to my friend who asked me, “Did it feel like the future?” To be honest, I’m not sure what the future holds, but something like Hatsune Miku is likely a part of it. Maybe not her persona itself, but the factors that helped bring her to fame are without a doubt something that artists and record labels alike can look to for inspiration—to help them march into the future.