We’re dying here. While we now know the exact premiere date will be April 14, at 9pm ET….we’ve been given no new scenes for Game of Thrones final season. Instead producers have made a special teaser just for us. Sure any footage is golden, but couldn’t we have just a bit more of a sneak peek? Please? Pretty Please? 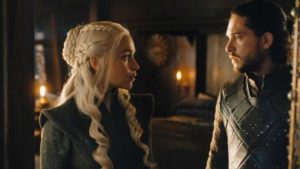 The first look teaser into Game of Thrones season 8 was directed by David Nutter (whose won Emmys for his directing on GOT) and a new score to accompany it by fellow Emmy winner Ramin Djawadi. The teaser features Jon Snow (Kit Harrington), Arya Stark (Maisie Williams), and Sansa Stark (Sophie Turner)as they traverse the eerily lit and dark passageways of the Starks underground crypt. Finally coming face to face with statues of themselves. Brilliant as it may be, the GOT show runners are keeping absolutely everything under wraps for this final season. Our only snippiets are HBO’s new season 2019 trailer with a clip of Sansa looking none to happy coming face to face with Daenerys as she utters “Winterfell is yours, your Grace.” and another mini snippet of Jon and Sansa hugging in the Winterfell keep. We are on the edge of our seats with anticipation. Catch the trailer about and let us know what you think. Be sure to click the link to watch the mini snippets attached to see what we have been gifted thus far. #FortheThrone will be here sooner than we think. But not soon enough!! Will you be doing any special viewing parties for the epic conclusion of the world wide phenomenon that is Game of Thrones?