JOAQUIN PHOENIX FALLS IN LOVE WITH ‘HER’

Director Spike Jonze is known for his cleverly realistic take on the world around him, and his latest directorial expedition, Her, is no exception with what might be the best romantic movie of the 2000s. The film takes place in the undetermined future. Technology has advanced in a somewhat conventional yet still quite a fantastic way!

Her focuses on downtrodden, recently divorced Theodore – never Ted – Twombly (Joaquin Phoenix). After hearing a convincing advertisement, he decides to upgrade the operating system for his computer. The unique aspect of this interactive OS is it has a learning A.I., voiced by Scarlet Johansson, that will grow and develop with him with continued usage. Before long, Theodore starts interacting with it – her? – On more intimate levels until they start to develop a relationship that even broaches the physical. As he continues to build the relationship, there is scrutiny from friends, co-workers and his ex-wife, who he continues to having plaguing visions about. The only significant drawback to the movie was a complete lack of tension and conflict. In most stories, the protagonist has to go on a hero’s quest, an adventure or some kind of a journey to get from A to B. Along the way, they overcome obstacles, both externally and internally as they face their demons and conquer the antagonist regardless of its form. Here, the only thing that he has going is his own internal struggle to overcome his insecurities. It does make for a somewhat compelling narrative initially, but it doesn’t hold up for a two-hour film.

The greatest strength of the film is its diversity of poignant, compelling yet still subtle commentaries and messages. For example, nearly everyone is using an electronic device to communicate with each other, nearly every direct communication between people is forced, uncomfortable and awkward, and there is even an entire profession dedicated to having people paying strangers to write personal letters for any events. Although this is a personal preference more than an objective criticism, it is refreshing to see a film that takes place in the future that doesn’t feature a completely dystopian society. There isn’t an oil shortage, there isn’t a gas shortage, there isn’t a tyrannical government watching everything everyone does and there isn’t an evil corporation bent on furthering their capitalistic empire. It’s Los Angeles / Shanghai set in a technologically driven but not warped civilization, and it’s much appreciated. 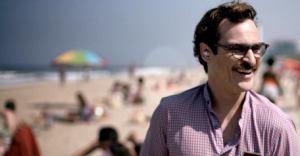 Romance in this film pushes the boundaries of what is an acceptable relationship and what isn’t. Nearly everyone who is in a conventional relationship has an inordinate amount of dysfunction, and those who have some kind of relationship with their OS’, although they as individuals might be somewhat put off. Being conventional is not something this film does, and by doing so they actually make the audience think for themselves and determine what are and are not good guidelines and boundaries for romantic relationships. The greatest achievement for any artistic expression is to evoke freethinking and elicit an emotional reaction from its audience. Her delivers this in spades, and for this reason alone makes it worth both the time and the investment.

This film had the full potential to be a comedic parody of itself, and yet it never strayed from its tone. Despite that, it is charming and very heart felt. You can actually see him falling deeper in love with Samantha, and through her words and the things not said in-between convey her developing feelings for him that culminate in a climax that will elicit an emotional reaction out of nearly anyone in attendance. It isn’t predictable and even takes the time to develop several secondary characters; giving them their own arc that reaches satisfactory, cathartic conclusions. Although it tended to drag on a bit through the second act, and the story might be a little far-fetched for the conventional, but if you can overlook those minute shortcomings, it will provide a great amount of entertainment and feelings for all. Three stars out of four.