THE HIDDEN GEMS AT SUNDANCE

Every year at Sundance, while filmmakers and festival goers fill the theaters, brands take the opportunity to flood Park City with lounges and parties hoping to get in front of entertainment tastemakers.

As usual, Chase Sapphire skinned an entire building this year in the heart of Main St. Complete with an assortment of movie memorabilia, including pieces from Sundance favorites like Hoops Dreams to costumes from the cult classic Super Troopers. They also offered anyone the chance to star in their very own Beastie Boys music video, as well as taste food from local Park City restaurants. At night, the lounge became a little more exclusive as it hosted the premiere parties for the film Hellion, which star Aaron Paul attended. He even took the time to take some photos with fans in attendance.

Down the street, presenting sponsor Acura, who also provided a fleet of MDX vehicles for festival transportation, took over a corner to show off their new 2014 Acura RLX. Photo booths inside the cars let festival attendees bring a piece of the action home with them, while outside the cars a slew of white siberian huskies posed for photo opps around the block. 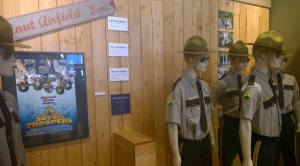 Up the road a little bit was Park City Live, the venue that held concerts throughout the week from artists like Ludacris, Steve Aoki, and Kaskade. Lines were absurd as fans waited outside in the freezing cold for their chance to get into the close and personal setting. But during the day, Park City Live was the exact opposite, a relaxed and quiet setting for people to come take a minute to escape the hustle and bustle of Main St. Santa Barbara sheepskin boot company Koolaburra invited celebs to come and try on a pair of their ridiculously comfortable boots. Festival actors Aubrey Plaza and Shailene Woodley came in grabbed a pair of the Koolaburra Snowjogs, while actor Joe Manganiello came and waited patiently for his girlfriend to choose a pair of La Volta boots. One thing’s for sure, when it comes to looking for a great boot that combines luxury with comfort, Koolaburra is it.

If Sundance showed us one thing this year, it’s that Main St. is still the place for brands to show us that value connecting with the independent film community. And while some companies are getting creative in how they show off their brands, there’s still plenty of value in providing simply a calm, quiet place for festival goers to kick back and relax after enjoying the snow.