‘THE HILLS’ STARS ARE ALL GROWN UP. KRISTIN CAVALLARI, LINE MAGAZINE COVERGIRL

The Hills stars are all grown up! Lauren Conrad was married to William Tell this past weekend and former “frenemy” Kristin Cavallari is featured on the cover of Line Magazine’s Fall/Winter beauty issue. She discuses with Line how motherhood has changed her for the better.

The mom of baby Jaxon and son Camden, 2, with husband, Jay Cutler, has welcomed the joy of motherhood and all it has to bring. “You just have so much more love in your life,” Cavallari says. “Motherhood really makes you realize what’s important in life and puts everything in perspective. It’s the hardest but most rewarding job.”

The Fabulist host commutes to NYC once a week from Chicago where her husband plays for the Chicago Bears to film the E! Network show. In addition to that, she also just launched a free app, aptly named “Kristin Cavallari.”

When asked in a speed round of questions whether she prefers Lauren Conrad’s fashion line or Whitney Port’s fashion line? This former MTV star stayed neutral and said “I’ve worn clothing from Whitney’s line. I bought a shirt from Lauren’s line, but I haven’t worn it yet.”

To read the full interview and see additional photos head over to Line Magazine. 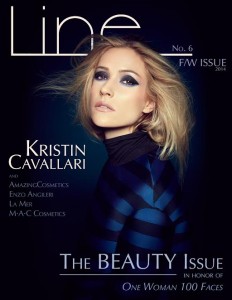