Opening night for the Hollyshorts Film Festival fest kicked off with a bang on August 14th at the TCL Chinese Theatre.

This year the organization honored brothers and directors Joe and Anthony Russo with the Visionary Award, which acknowledges their previous contributions to the fest and remarkable work in film.

Both brothers chatted with Press Pass L.A. on the red carpet where they expressed how they felt about receiving the award. “It’s enormous, I mean, we started as Indie filmmakers,” said Anthony Russo. “We came up through the film festival circuit and that’s how it happened for us.”

Back in the 1990s, the duo got their start writing and directing the film Pieces. The small credit card movie debuted at the Slamdance Film Festival where director Steven Soderbergh happened to view the motion picture. A week later, he called the Russo brothers to applaud their work on  Pieces and offered to produce a film for them. After that, it was goodbye, Cleveland and hello, Hollywood. “We feel like we owe a huge debt because of that experience and we’ve stayed very involved with Slamdance; we’ve been involved here as well” said Anthony. “We love film festivals, so it’s really special for us to come here and receive the award. ”

So, what’s next for the Russo brothers you ask? The pair has confirmed that they are directing the third installment of Marvel’s hit action movie Captain America. The film is slated to hit theatres on May 6, 2016. 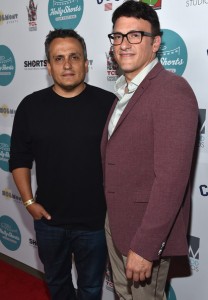 Once the red carpet wrapped up, the Russo brothers made their way into the theatre to watch a number of short films from Andrew Wilson’s Satallite Beach to Bill Plympton’s movie Footprints. If you are in Hollywood, be sure to catch some of the short film screenings this weekend. The festival runs until August 23rd.