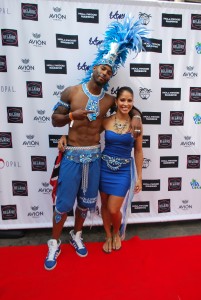 In preparation of their 48-foot float in the parade, guests arrived to the red carpet dressed in bright and colorful carnival costumes. In attendance was Riley’s family, friends that included the Queen of Soca Alison Hinds along with Camille Winbush and co-stars Valery Ortiz and Logan Browning of the VH1 show Hit The Floor.

Robert explained why participating in cultural events is important. “I am proud of where I came from, my mom is from Trinidad and my father is from Barbados,” says Riley. “It’s also the most fun and contagious event to go to,” says Riley.

Actress Valery Ortiz also shared her excitement for Hollywood Carnival- Los Angeles Cultural Festival. “It’s events like this when people get to celebrate cultures with people from all different ethnicities,” says Ortiz. Born in Puerto Rico, Ortiz discussed her journey to Hollywood and how the industry is getting better for minorities. And how another Puerto Rican actress was helpful in her career. “Jennifer Lopez has paved the way for Latina’s in general,” says Ortiz. 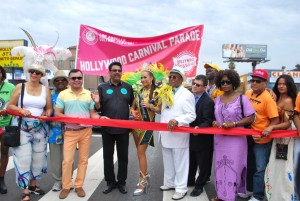 A ribbon cutting ceremony opened the Hollywood Carnival – Los Angeles Cultural Festival celebrations. Parade floats were lined up along Hollywood Boulevard from Vermont to Highland. Spectators lined up on the sidewalks ready for the show to begin. Among the many cultural groups were: Peru, Honduras, El Salvador, Brazil, Cuba, Ecuador and Hollywood Massives’s float. There were bands and dancers in the streets equipped with everything from confetti machines to men walking in stilts.

Definitely a festive event not to miss- this years Hollywood Carnival- Los Angeles Cultural event delivered an excellent glimpse of different cultures from around the world.