Starting off the night with a BANG… literally… the topic of male genitals kicked off this year’s Hollywood Radio and Television Society’s Summer Comedy Panel Wednesday at the Beverly Hilton featuring  Silicon Valley creator Mike Judge, creator of The Mindy Project, Mindy Kaling, Mike Schur of Parks and Recreation and Rob McElhenney of It’s Always Sunny in Philadelphia. 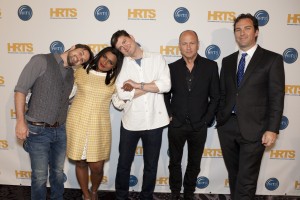 The comedy show runners sat down in the panel to discuss their current shows, where they are going and the expectations and ideas behind the shows that are dominating the sitcom world.

Judge started the night by explaining the thoughts behind the extended “dick joke” in Silicon Valley’s season finale. “One of our writers, Matteo Borghese, was talking about how his roommate said you could jack off four guys at once,” Judge said, “It turned into this scene that started getting a lot longer, and then we had a Stanford graduate, now a PhD, on staff. All I asked him to do was to put some equations on the board. Now it’s a 12-page thesis. This thing just got way out of hand.”

Both coming from NBC’s hit long-running show, The Office, Shur and Kaling agreed that when bringing in new writers, they need an equal amount of respect for the creator and the process of the show. “Someone who is pleasant to be around and is willing to dig in with you,” Kahling said, are some traits she looks for in bringing in new writers. “Especially when a show is starting…they have to have grit… they have to want to work really hard,” Khaling said. While Shur admitted that he found his last two writers for Parks and Rec from reading their comedic Twitter accounts. Both having starred in their own shows, Judge and Kaling agreed that actors who are writers tend to write better dialogue. “I like writerly actors,” Kaling said.

Rob McElhenney, creator and co-star of It’s Always Sunny in Philadelphia which is going into it’s 10th season admitted that his show has more leeway to do raunchier things without needing network approval. As the show has already been renewed until it’s 12th season, McElhenney sees no reason for it stopping from there. “Why would we ever stop?” McElhenney said, “These people are dumb enough to pay for it.” 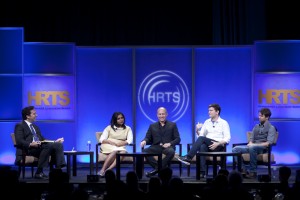 In terms of writers block, most of the panelists had different solutions. “I don’t think it exists,” McEllhenney said, while Kaling said “deadlines,” help keep the process moving and Judge admitted “stress and panic, unfortunately that’s the best way.” One thing’s for sure, these comedy show runners are far from being competitive rivals. Having worked together or keeping up with each other’s shows, these comedy creators seem to be big fans of one another’s sitcoms, whether on cable or headed up by a network. “This is the first time where I have actually watched and liked all of the shows from the panelists,” said McEllhenney.