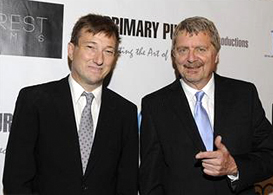 Addiction is more than just a state of mind.  In truth, there are many ways to describe it and varying opinions on whether it’s an inherited condition or the result of dependence and reliance. Whatever the cause, it continues to thrive in society and infect itself upon many individuals. These are matters that can not get enough exposure, and Primary Purpose Productions, along with the Dana and Albert Broccoli Charitable Foundation, are making sure this harrowing socio-problem bears itself vulnerable.

The two prestigious companies held the “Trilogy of Recovery”, screening three short films (Bedridden, Men in a Box, Plan B) that raise awareness, not only about addiction, but itʼs many forms. The event took place at the Writers Guild Theater in Beverly Hills and benefitted the Midnight Mission, selected for its efforts with drug and alchohol rehabilitation services and efforts to end homelessness. Primary Purpose Productions is co-founded by Oscar-nominaed director Jonathan Heap and best-selling author turned filmmaker Lowell Cauffiel who worked together to create these films along with A-list talent that donated their time.  Two of the films were produced by the Dana & Albert Broccoli Foundation. The late Albert Broccoli was responsible for producing the James Bond films and his son Tony and wife Rika have been long-time supporters and continue this work with Primary Purpose’s films.

Bedridden is a funny romp, which follows a young man, hand-cuffed to a bedpost, wandering around L.A., trying to purchase drugs. His runs into the law, problems on the subway, and worse. Itʼs a light-hearted little gem of a picture that takes a look at the seriousness not only of the addiction, but the family members of the addicted and how they are affected. The cast is spot-on, and the whole experience is fun and thought provoking.

Plan B seemed to be the audience favorite, sporting John Michael Higgins in a role that seemed to represent most of the L.A. CEO types. Higgins headlines as a head honcho type who is addicted to power and control – a clamp which is just as much a problem, and equally as detrimental as any sort of substance you hear about. Also light hearted and chalk full of wit and irony, the picture seemed also to be the audience favorite, offering light bits of comedy to juxtapose the harsh reality of Higgins dictatorial lead. No doubt too, many people would have been struck by the start realism of Higgins character, the boss from hell, someone we have all met before. His performance benefited from him letting us see into the soul of this type of person, why this person does what he does, and how he became addicted to it. It really makes us think about how to understand this type of person more, and in turn, help them, instead of letting out anger get in the way our thinking.

But the short that jolted with the most impact, was the stark, brutal, emotionally charged Men in a Box. Kurtwood Smith delivers a fine performance as an incarnation of B.F. Skinner (named aptly, Skinner) who is experimenting lab rat type human response tests on a willing participant (later revealed as a man with a substance problem.) Smithʼs Skinner is both vindictive, but professional, demeaning, but sharp, beauty and the beast – a sheer human representation of substances themselves. The willing subject, a man named Brock (skillfully handled with human torch bravura by Daston Kalili) is given a “reward” in a vile of substance when he “passes” or “completes” a obstacle course set up in a sterile, white padded cell. When he becomes volatile, and rebellious, and electro-pad ignites and shocks him, further testing his ability to complete the course for his “reward” and therefore determine how far heʼll go for his “addiction.” Ultimately, both men are revealed to be in a “box” way of thinking. Outstanding, in itʼs attempt to drive the viewer mad, with rage, with sadness, with penultimate realization, Men in a Box was just the right touch of spice to offset the lighter fare of the other two films.

The reason behind the event is the most touching part of the evening. Raising awareness for such a widespread problem is tough to do, but is done quite often just the same; still it takes that magic something to pull it off, and the personnel behind the “Trilogy of Recovery” managed to pull it off beautifully. No star-studded PR, or A-list celebrities needed to attend, to make this one heck of an event. The compassion in the air was infectious, and though the flashbulbs went off like Roman candles, the real light, was the proverbial one that lies at the end of the tunnel for anybody who has ever gone through an addiction.

When it all comes down, with events like these, there will always be hope for those struggling with addiction. As we dawn on a new world of healthcare, of medicines and treatments, a night like this will be remembered for all that they contributed to helping manage it…and more.