If there was ever a place to discover up-and-coming talent in the music industry, Hollywood’s iconic vinyl shop, The Record Parlour is undoubtedly the be-all and end-all. Like a shrine to music’s best, scores of celebrated albums line the shop’s walls and seemed to bless the packed room during Wednesday night’s Hollywood Singer-Songwriter Night, hosted by award-winning country star, Ashlee Williss.

Over the course of the evening, the Emcee and hostess introduced the audience to a slew of the next big stars on the music scene. But first, the country cutie took the stage herself, performing her sentimental “Lost in Time.” She also sampled her rocking hit single “You Only Want Me When You’re Wasted,” the video for which was directed by Karate Kid actor, Billy Zabka, who also made an appearance.

Williss has worked with nearly everyone in the music industry, including Martina McBride, Barry Manilow and Lionel Ritchie. She even shared the stage with Stevie Wonder at the Grammy’s, and Rock n’ Rock Hall of Fame legend Jackson Browne said that she “has the elements of all my favorite singers put into one.”

Willis then called twenty-one year old sensation Katie Pearlman to the stage, who admitted that she only started writing songs a year ago. But with her powerhouse Adele-like voice and raw, honest lyrics, she already has the makings of a star. Her tracks “Letting You In” and “Gotta Do You” are already getting quite a bit of buzz online. 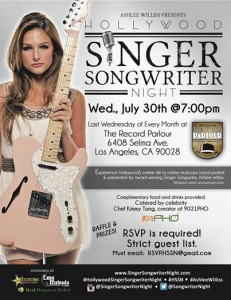 The next young songstress to hit the stage was twenty-two year old Isabella Rose, a vocalist known for her covers of Colbie Caillat, Magic, and Katy Perry. She is steadily gaining a following for her soft and ethereal original numbers “Best Kind of Me” and “Cause I Feel,” both available on iTunes. You can also find videos of Rose sharing a duet with friend, Ryan Cabrera from time to time.

Also featured on the evening’s roster was Oklahoma native, Maggie McClure. This chanteuse and pianist has opened for Sara Bareilles, and her singles “Reset,” “Never Let You Down,” and “Out of My Mind” have been featured on Dr. Phil, Cougar Town, and The Hills. McClure’s album chronicling her move to Hollywood, Time Moves On is out now.

Finishing the event was Kevin Campos, who met Williss when the vocalist recently opened for Enrique Iglesias. The Hollywood native is also one quarter of the German rock-band High South, who were hailed as the new Eagles. Campos belted out a handful of his soulful solo original compositions, including “Before You” perform “Go Home” and “Driving” on a Sunday.

Guests sampled freshly-prepared, bite-sized pot stickers and spring rolls from French-Vietnamese fusion restaurant ,9021Pho and sipped on sponsor’s Luna Malavada Tequila. Their small-batch, one-hundred percent agave is only harvested during a full moon, when the nectar is said to be at its sweetest. Lucky members of the audience won raffle prizes such as gift certificates from Guitar Center.

The evening proved to be the perfect opportunity to catch a glimpse of these rising stars before they headline at the Staples Center.