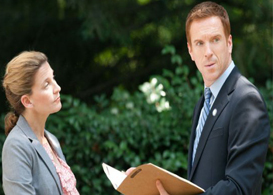 After staging a veritable coup at the Emmy Awards, the eagerly awaited second season of Homeland opens with Carrie (Claire Danes) at peace and waxing Candide by cultivating her garden.

Former Sgt. now Congressman/ Al-Qaeda sleeper Nicolas Brody (Damian Lewis, who is also the most surprising Brit since Stringer Bell) has found some peace as well following the harrowing events at the end of the first season where he nearly blew up the Vice President and ended up killing fellow soldier/spy Tom Walker to prove his ongoing commitment to the vengeful cause.

The two new Emmy winners’ peace soon comes to a screeching halt as new information featuring those dreadful words repeated over and over again ‘another attack on the United States’ comes in through a new contact. This forces Saul (Mandy Patinkin) to pull Carrie back into the fray despite having been thrown into a mental institution the last time she crossed paths with the CIA. Brody’s peace is broken when Abu Nazir reaches out to him for another mission. Both leads are unwillingly pulled back into situations they thought they had put behind them. But both also feel an obligation to see them through.

Al Pacino understood this in Godfather III, having once thought to be out only to…you get it. This new mission for Brody comes just as a larger spotlight is shined on him and his family with the Vice President (Jamey Sheridan) telling him he has put him on the short list to be his Vice Presidential candidate. The spotlight gets a little brighter when his daughter makes a typical teenage slip-up at school that forces Brody to reveal some things to his family he would have rather kept secret.

I was just as shocked as everyone else when Homeland started taking home the big awards, especially given the pedigree of Mad Men and the fact that they also had a fantastic season. But Claire Danes was special, even extraordinary last season, and Damian Lewis somehow kept up with that. I’m hoping these two somehow find themselves together again, and I never root for the adulterous romance.

I should take note of the timeliness of the show as well, featuring an American embassy under siege by angry protestors. With Carrie back overseas and doing what she so obviously enjoys and Brody already digging himself holes – both literally and figuratively, season two of Homeland has the counterintelligence to defend its upset at the Emmys.