Homeland has got some real stones. Other shows overstay their welcome, keep boring characters, fight making any big changes until they’ve already worn out their welcome (cut to Sookie and Bill shrugging their shoulders). Homeland will never let itself get to that point.

Homeland got sick of its own storyline of a returning POW-turned terrorist spy James Brody (Damian Lewis) after season two and then spent season three dismantling the rest of it. They essentially flew a drone missile into the shark before they could jump it. This has been the show’s modus operandi from the first season. They have never let us settle in and be comfortable and complacent. Much like the subjects of this show, the audience is perpetually tense that anything can happen at anytime. George R.R. Martin would approve.

To this point Damian Lewis had already won an Emmy and a Golden Globe for this role. Claire Danes as Carrie Mathison has two of each to her credit. It is rare for a show to have a lead character whose journey creates such a volatility. This show has two of them. Such a thing can only last so long before their collective craziness strains credulity and you find the show’s head crowning its own ass. The showrunners understood this, which is why they did what they did in season three. 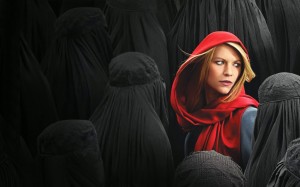 Brody is eventually brought back from hiding in season three because of this top secret mission and no one else can blah, blah, you’ve seen a spy movie before. The details are unimportant, the result was Brody being captured by the Iraqis and lynched in a public square in the season finale. Killing off your award-winning lead actor takes tremendous stones. To make things more complicated Carrie is pregnant with his love child. George R.R. Martin likely saw it a lost opportunity that they all weren’t brutally killed.

Nowhere else for this show to go, right? For three seasons Brody has been the dangling carrot (get it? Dangling? C’mon, the fact that he is a carrot top warrants bonus points) that we the audience have chased. Carrie Mathison is a fascinating character, and Claire Danes does a phenomenal job giving depth to this complicated and troubled woman. But Brody was the fulcrum, he decided the shifts in balance whether he liked or wanted to or not.

Now Carrie is back in the field. Season four opens with her reluctantly ordering a military bomb strike against terror targets along the Pakistan border. What they hit turns out to be a wedding, causing many civilian deaths and making headlines on the news cycle. Surviving the carnage is young Aayan Ibrahim (Suraj Sharma, Life of Pi), whose video of the bombing that killed his entire family hits youtube, putting him on all the wrong people’s radar.

At first you think Aayan’s story arc was going to show the evolution of a angry young man becoming a terrorist. But after more events unfold you can see him become something else more important than just a political statement. He is the new carrot.

Don’t worry, Carrie is still Carrie. We spend a good deal of time with Carrie coming back to D.C. where her sister is taking care of her infant daughter. To say Carrie is an unfit mother is to say that Fallujah is not a great vacation destination. It is a severe understatement. The last thing she wants is motherhood, as we find out during an absolutely terrifying bath scene where Carrie flirts a bit with infanticide. It was horrifying and so well done that I immediately went and checked on my sleeping little one. Great casting on the infant, it’s like Brody had a kid just so that she could be cast in this show, she looks exactly like him.

Aside from the characters still being top-notch and full of depth, we have a very relevant storyline about drones and drone strikes and the impact that they have moving things along in season four as well. This is an issue you can see discussed daily on various news outlets. But Homeland is not here to make a political stance, and say ‘this should be this way’ or whatever.

Homeland knows that these larger actions come down to more than just ideals, but people. Individual people put in difficult situations making decisions that affect entire countries. It is probably simpler just to have easy to identify good guys and bad guys, to know which side is more in the right. But that is not the world, and getting past ideals and having a conversation about the actual people that make these things happen takes courage. Fortunately, Homeland has got the stones.