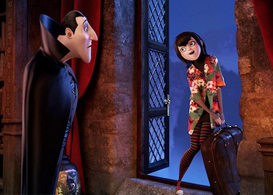 Can the most famous of the classic Universal monsters appeal to the youthful generation of today? That is the question that director Genndy Tartakovsky – creator of such critically acclaimed animated series Dexter’s Laboratory and Samurai Jack – decided to attempt to answer. But does he give the audience what they were asking for, or are the beloved creatures forever besmirched?

Our story centers around Count Dracula (voiced by Adam Sandler) who has constructed a hotel in the middle of the Transylvanian wilderness in order to protect his daughter Mavis (voiced by Selena Gomez). Since Dracula’s wife was killed by a rampaging horde of angry villagers, he has taken it upon himself to stow his daughter away from the world so that she’ll always be safe. Of course, now that she has turned 118, she is ready to see the world and everything that it has to offer. Her father, however, isn’t used to the idea of his little girl all grown up; so he invites all his old pals for a birthday party extravaganza. However, when a human stumbles upon the monster’s once impregnable sanctuary, chaos and hilarity ensues.

Filmmakers should take note of how superior animated movies have taken advantage of the 3D format. Whether it’s the characters leaping from a high dive into a pool, different monsters flying or screaming at the screen or even just a simple panoramic view of the surrounding area, there isn’t anything that isn’t perfectly exaggerated by the excellent camera work. Considering the amount of movies these days that just use 3D as a cheap cash in, it’s refreshing to see one actually take full advantage of the medium.

Where this movie truly shines is how it combines the contemporary tempo and style of the film with the classic themes and characters. We are shown the classic over-protective father with a mother no longer a part of their life – very Disney princess – and how each deals with it. However, the twist of including the father’s friends – voiced here by Adam Sandler’s real life friends Kevin James, David Spade and Steve Buscemi playing the voices of different monsters – allotted for a chance to show each of the monsters in a new light. Whether it was the Wolf Man with a litter of pups, Frankenstein’s inherent fear of fire, or Dracula as a father figure, putting the characters in a new light that is both amusing and entertaining.

The amount of emotions this movie is able to elicit is genuinely impressive by any standards, let alone an animated feature. When we hear Dracula give the sordid details of what happened to his wife, it is difficult to not be moved to tears. When Dracula and Johnny are playing on the tables, it’s difficult to not be caught up in the moment as they fly around and, at times, directly at the screen.

At the end of the day, it is a kid’s film so, unfortunately, it is somewhat prone to the pitfalls therein. The final song at the end of the film is a bit painful to sit through more than true enjoyment. There are a few jokes that are little more than someone farting or falling down to try to get a cheap pop out of the kids. And the less that is said about Cee Lo Green’s perpetually auto-tuned sounding voice grating with every line of dialogue, the better.

It is clear there was a great deal of effort put into this film. All too often, kid’s movies are made with as little thought, effort or money possible just because of the lack of true competition in the market. Parents will take their kids to see it just because it’s the family friendly feature, regardless of its content, so there is a typical lack of effort made by the production. In the case of Hotel Transylvania, it is apparent that they took time to make a good story, characters that aren’t too frustrating to watch and a conflict that elicits an emotional reaction from the audience. It is not going to be the most entertaining film of the year, and it is not going to win any awards, but if you have any children, it would behoove them to see it. And it wouldn’t even be the worst thing you had to sit through.

A solid two stars out of four.