HOW TO TRAIN YOUR DRAGON 2- REVIEW AND Q & A

“When Vikings ride dragons, the whole world becomes a lot bigger” promises Hiccup as he soars over a pillow of clouds and across an unknown sea. I had an opportunity to see this expanded world of How to Train Your Dragon 2 in glorious 3-D at the Hero Complex Film Festival in Hollywood.

I admit I was only a lukewarm fan of the first film, I think it got lost in the larger-than-a-dragon shadow cast by Pixar and Toy Story 3 that year. But I went in to this one not only as a critic, but as a father vetting a potential theater trip for my son, who has recently fallen into the world of animated movies with an insatiable appetite.

After watching, I found that this is a film that people of every age and stage of life can enjoy and find relevance with. What first impressed me with HTTYD2 is how the story has evolved from the first installment. Dragons, once considered a scourge, have now become commonplace on the Viking isle of Berk, with people taking them as pets and even participating in Dragon-riding games involving the tossing of sheep into baskets. 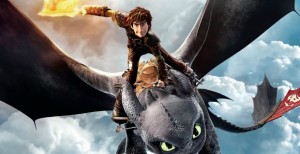 Meanwhile Hiccup (Jay Baruchel) and his nightfury Toothless have begun to map and explore the world beyond Berk. During one such venture Hiccup and Astrid (America Ferrera) Hiccup’s father Stoick (Gerard Butler) has recently told Hiccup that he is to take his place as Clan Chief, a duty Hiccup does not want nor thinks he is fit for. Hiccup’s transition from adolescence to adulthood and the responsibilities that will be forced upon him is one of the main and fully-realized themes from this film. A film that is meant for the 16-24 age demographic? Check.

The film manages to create an evolving world that stands on its own. No name-dropping pop culture references, no grandstanding musical numbers, just wonderfully visceral action, colorful characters, wit and humor organic to the time and set, and pathos. During the Q & A that followed the film with Jay, America, and writer/director Dean DeBlois, DeBlois said he imagined these films as a trilogy and that The Empire Strikes Back is the greatest sequel of all time and wanted to model this film a bit around that. That includes the sacrifices and losses that occur along the journey. The fact that he managed to tell an entire story that is not yet the entire story once this film ends will speak to anyone that was a fan of the amazing original trilogy, it is an excellent model. Speaking to almost everyone born after 1960 and has experienced Star Wars demographic? Check.

More than all that, and most importantly of all, I had a blast. I sat there wide-eyed as a child on Christmas morning for the entire film marveling at the incredible 3-D, especially the dragon-riding sequences. I was intrigued by the story, the growing hemisphere, the growth of Hiccup and how that would come about in the third film. I shed a few tears, but I will not say if they were happy or sad. I laughed out loud at least eight times, especially during an exchange between Astrid and Hiccup where she does a hysterical impression of him.

Later on at the Q & A DeBlois noted that this was the only scene that the two actually recorded together, so they could play off each other and step on each other’s lines. Jay Baruchel embodies the hidden elements of Hiccup so well, Hiccup is a bit awkward, but his appearance is deceiving, just like Baruchel. I found him to be thoughtful, informed, and very confident in Hiccup’s skin which comes out in his performance and through the stellar animation. 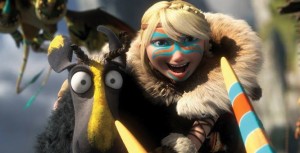 Speaking of animation, apparently they created this new modular system for creating hundreds of dragons that DeBlois absolutely nerded out about. Anytime a technical or story element question came along, DeBlois would perk up and unleash his inner nerd (like the flame-saber), who I found to be endearing and incredibly passionate about his work and yes there are literally hundreds of dragons of just as many breeds and colors and that is not even close to the coolest part about the creatures in this film. Let’s just say there are things that can cast bigger shadows than even the billion-dollar Toy Story franchise.

Dragon 2 is rated PG. It gets a bit intense in a few spots, and the action sequences move fast, but not frenetic. If your child can handle 3-D then I recommend that, especially since the film was authored in 3-D. Otherwise 2-D is probably fine, but either way you will be getting a gem of a movie that every breed of dragon in your own family will love. Kids of all ages demo? Alpha Dragon size check.