Fresh off a breakthrough debut performance on Saturday Night Live last week, Hozier, led by Irish singer-songwriter Andrew Hozier-Byrne left the sold out crowd atn a state of seeming transcendence on Thursday night with a sumptuous and soulful blend of gospel, blues and folk.

Byrne, a former choir singer, treated the over a thousand Angelenos packed in Immanuel’s Gothic pews to his signature powerhouse vocals that somehow echo the timeless ache of the greatest voices in music’s hallowed past. He possesses a vocal range rarely seen in today’s music, one that sinks into sultry whispers and then bursts forth into haunting wolf-like falsetto howls that soar to the rafters and send shivers down your spine. So far, the 24-year old troubadour has used that voice in the creation of his seminal track “Take Me to Church.” It is a losing your religion song that reads like a Martin Luther-esque litany of pointed criticisms against the Church, especially the long-promised notion of everlasting life through faith.

Byrne with his long, dark wavy hair and scruffy beard eerily resembles Jesus Christ and preaches a new gospel here, one of finding salvation in a physicality of lovemaking, the tangible comfort and bliss found in a lover’s arms. The soft-spoken Irishman’s influences are easily apparent here as belts out “amen” again and again throughout the song, a nod to soul legend Otis Redding’s track of the same name. The video for “Church” skyrocketed the singer to international success with its depiction of the hardships faced by the LGBT community, especially with recent attacks in Russia. Byrne is an outspoken supporter of equal rights for same-sex couples and the video now has over 15 million hits on YouTube.

It has truly been a meteoric rise to fame for Byrne. He only recorded the song’s vocals in his parents’ attic a year ago. Since then, his popularity has spread like wildfire, making appearances on The Late Show with David Letterman and Ellen and touring non-stop. His upcoming show at the Fonda Theater in Hollywood in February is already sold-out and his brand-new self-titled debuted just debuted at number two on the Billboard charts. Despite all of this success, Byrne seems humble and grounded. The week his album was released, he posted his phone number on Twitter and asked his 64, 000 followers to call and chat. A few lucky fans got through before the phone literally melted from the sheer number of calls and texts.

“I’m gonna try something” the six-foot five singer announced a few songs into his set under the cathedral’s vaulted 80-ft ceilings. He then hopped off the stage and took position in the center aisle of the cathedral with just an acoustic guitar in hand. Without the help of any sound amplifiers, Byrne took advantage of venue’s natural acoustics and performed an intimate and sensual rendition of the Skip James classic “Illinois Blues.” The tune effortlessly wafted through the air and filled the room like incense.

Now, if you are thinking that this Irishman can only do the sad and slow numbers, you would be horribly mistaken. No, one of his newer tracks entitled, “Jackie and Wilson” is the raconteur’s exploration into the lighter and more playful side of songwriting. Here he builds a whole make-believe world, fantasizing about a stranger who left his world just as quickly as she arrived. As he dreams about this mystery woman amidst bluesy riffs as he declares “We’ll name our children Jackie and Wilson/Raise ‘em on rhythm and blues,” a witty homage to another one of his influences, R&B legend and “Higher and Higher” singer Jackie Wilson.

And like any true bluesman, Hozier’s songs burn with sexual desire and longing. This is especially palpable in the downright smoldering “It Will Come Back “ with lyrics that drip with innuendo like “It can’t be unlearned. I’ve known the warmth of your doorway/Through the cold/I’ll find my way back to you.” Byrne is a master storyteller, depicting a relationship from the perspective of an abused male character in the soft and tender, “Cherry Wine.” Here he croons, “open hand or closed fist would be fine/ the blood is rare and sweet as cherry wine. “ He seems to revel in the idea of depicting the most wretched things, such as abuse in the most romantic and poetic manner. He plays with the dichotomies of light and shadow, love and violence and the sacred and profane.

It is perhaps for this reason that filmmaker Zach Braff chose the track for the soundtrack to his summertime flick starring Mandy Patinkin and Kate Hudson entitled, Wish I Was Here and attended the show Thursday night. The former Scrubs star is known for being somewhat of an indie music curator after the G

rammy-winning soundtrack to his film, Garden State  introduced the world to The Shins 10 years ago. This endorsement, as well as “Take Me to Church” being used in the trailer for the upcoming Brad Pitt World War II flick, Fury translates into an untold number of new fans exposed to his work. Indeed, Hozier is Hollywood’s new golden boy and the industry has gotten a whiff of him and is clamoring for more.

As the evening drew to a close, the entire audience stood and danced along the catchy “From Eden” a tale of unrequited love as told by the Devil. He compares his love interest to the goddess-like biblical Eve and tries to tempt her away from her partner in Adam. He pines, “I slithered here from Eden just sit to outside your door.” The Bible is indeed one of the greatest stories ever told and he Byrne humanizes one of the oldest in the book.

The scores of religious figures illuminated in Immanuel’s stained glass windows seemed to almost bless this most special of moments in time from above. Here we find an artist chocker block full of raw talent, on the cusp of uber success, one that draws from a plethora of the most sacred of musical, religious and literary influences and somehow makes it all his own. It is one hell of a start to a career. 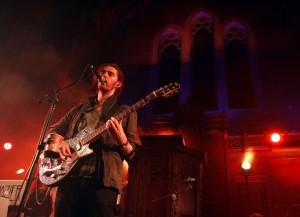