HULK HOGAN COULD BE YOUR NEXT VILLIAN IN EXPENDABLES 4

While doing a press tour, Hulk Hogan mentioned that he is up for a villain role in the next Expendables movie.

Now, while there is some banter going back and forth debating if this is the right move for the franchise, instead I just have two questions; how has Hulk Hogan not been in one of these films already, and how can THIS be the move that “jumps the shark?” 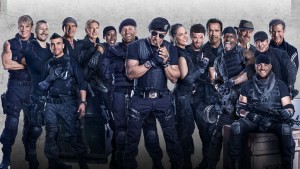 Could Hulk Hogan join the cast of Expendables 4?

For those that don’t know, The Expendables is a film franchise starring Sylvester Stallone wherein he, essentially, takes some of the biggest action stars from the 1980s and 1990s and puts them together as a sort of “who’s who” action super team to save the world, featuring such names as Arnold Schwarzenegger, Chuck Norris, Dolph Lundgren, and many others.

As such, the role would be PERFECT for “The Hulkster.” In addition to being the most famous professional wrestler aside from maybe Andre The Giant, he also has a slew of ridiculous and sometimes outright bad movies to his name, including the likes of No Holds Barred and Suburban Commando. Not to mention, after interviews given for the WWE Network and speaking parts on Robot Chicken, we know the Hulk doesn’t take himself too seriously, which is another prerequisite for a film such as this. With such credentials, it is little wonder that he was cast for a role in the next installment.

As for whether or not this move jumps the shark, I can only ask… have you seen the previous movies? Harrison Ford as a former fighter pilot turned CIA man? Sylvester Stallone being not only an incredible hand to hand fighter but completely irresistible to beautiful women? Arnold wielding a mini-gun? Chuck Norris actually telling a Chuck Norris joke in the middle of a movie? Anyone who would pay money to go see Expendables 4 is not going to be turned off from that idea just because Hulk Hogan was involved in it. If you don’t think that the very notion of Expendables 4 is, in of itself, jumping the shark, then I believe drawing a line in the sand over Hulk Hogan is really splitting hairs.

The next relevant question I would have would be… can you picture Hulk Hogan as a main villain? I mean, sure, at 6’6, 300+ pounds, he would be an imposing fighter – bad back and bad knees notwithstanding. However, would you really see him on the same level of intellectual mastermind as Eric Roberts or Mel Gibson? Wouldn’t a better question be, “if Hulk is going to be a villain, who is he working for?” To which, I hope against hope the answer is Danny Glover.

You could argue that Hulk Hogan taking this part is taking the role away from a younger guy who needs to make a name of himself somehow in Hollywood, but even then, your gripe would be better aimed at the notion of the franchise as a whole rather than Hogan. As a matter of fact, that issue was addressed and, seemingly, resolved by including younger faces such as Ronda Rousey and Kellan Lutz in Expendables 3.

As with many rumors and in development moments, I would suggest to just wait and see how this plays out. Lord knows there are plenty of seasoned veterans of the silver screen who have been tossed around the rumor mill: such as Robert De Niro, Jack Nicholson, Clint Eastwood, Nicholas Cage, John Travolta, and even a returning Bruce Willis. Is Hulk Hogan’s involvement jumping the shark? Sure, but no more than anything else has been in the series thus far.