CREATIVE VISIONS AWARDS KNOW HOW TO ‘TURN ON LA’ 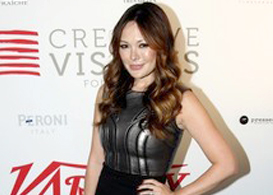 Creative Visions Foundation (CVF) hosted the “Turn On LA” event to honor the accomplishments of activists, photographers, writers, filmmakers and other industry leaders that use media to help raise awareness about social change with goals of changing the world around us. The event was held at the Santa Monica Bay Woman’s Club where celebrities and other supporters came out to celebrate the honorees.

CVF is inspired by the life of Dan Eldon, an activist that was killed in 1993 while covering the conflict in Somalia. The foundation was founded by his mother, Kathy Eldon and sister, Amy Eldon to honor his legacy and to continue the great work that he started through creative activism. The foundation has supported over 100 projects and raised more than $11.2 million to fund them.

In place of the usual red carpet was a green grass “carpet” where we got a chance to see and chat with celebrities including: Maria Bello (A History of Violence), Eric Mabius (Ugly Betty), Steve Jones (The X Factor), Alexandra Chun (The Young & The Restless), Alicia Coppola (Common Law), Mariel Hemingway (Manhattan) and more.

Actress, Lindsay Price told us that she just directed her first documentary under the Creative Visions umbrella. “They are my mentors, they helped me learn how to fundraise, learn how to be a filmmaker, and I wouldn’t have been able to do it without them so I am a great supporter of their organization.” Her documentary, Sending the Orphans Back is about her mother who was orphaned as a child during the Korean War and had to travel with her brother to escape. The movie documents Lindsay and her mother going back to Korea to retrace the steps from her journey back then. The event was filled with music, food, art and a great time!