You know that if Oprah Winfrey and Steven Spielberg are making a movie together, it has to be good. The incredibly dynamic duo serve as producers for the new film, out August 8th .The Hundred-Foot Journey, their first collaboration since The Color Purple, delves into the blending of the French and Indian culture and cuisine. 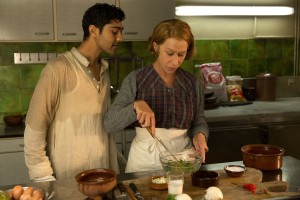 It may be lighter fare than Purple, but it still serves up some serious heart and soul. In the heartwarming and poignant film, based on the bestselling novel by Richard C. Morais, The Kadams, a family of restaurateurs search for a new life in Europe after a devastating fire torches their Mumbai eatery and kills their mother. The lively bunch soon settles and starts to rebuild in a rural town in southern France.

One of the family’s sons, Hassan (Manish Dayal) is a gifted culinary genius who yearns to learn more about haute French cuisine. Exactly one hundred feet away, the family’s neighbor, Madame Mallory (Academy Award-winner, Dame Helen Mirren) owns a traditional and refined French restaurant and she is not a fan of the family’s fiery zest for life, spicy food and loud music. Things reach a boiling point when Hassan falls for Madame Mallory’s star sous-chef, Marguerite, played by Canadian actress Charlotte LeBon. The film is essentially what you would image the lovechild of the films Chocolat and Ratatouille would look like. It is even directed by Lasse Hallstrom of Chocolat fame.

This film is ripe with beautifully executed symbolism and lush imagery. Like a love letter to the art of cuisine, the film features many scenes shot from food-level and close-ups of the sizzling, delectable-looking dishes. You will leave the theater starving, unable to satisfy your newfound craving for a goat tikka masala bourguignon combination dish. Journey is not just food for the eyes, but also for the soul. The elements of fire and water become like characters in the film, revealing the film’s deeper meaning and metaphors. The family’s fires of passion, hatred and ambition are cooled, extinguished and tempered with the recurring French rain.

Madame Mallory’s perfectly polished restaurant is even named Le Seule Pleure—the weeping willow. Only the right balance of fire and water can give you the steam you need to cook well, just like the how the best dishes find the right balance between tradition and innovation. At its heart, Journey is about opening up to change, how even the smallest steps can make a huge impact. The act of crossing the street can open you up to a whole new world. The film also thoughtfully questions the idea of home. With its themes of displacement and alienation, Journey shows us that lovingly prepared food can transport you back home in a single bite. It sparks powerful memories and can guide you back to what is truly important—love and the family you create.

Not only was the film beautifully written, but the acting was superb as well. It is truly a joy to watch the incomparable Mirren spar with Papa Kadam, played by veteran Indian actor, Om Puri. For both characters, their tough stubborn exteriors slowly melt to reveal their soft, vulnerable centers, just like one of Hassan’s favorite dishes, the sea urchin with its prickly shell and delicate core. Their opening up to each other was undoubtedly the heart of the film, as it should be. On the other hand, the relationship between Hassan and Marguerite remained a bit undercooked and underdeveloped. 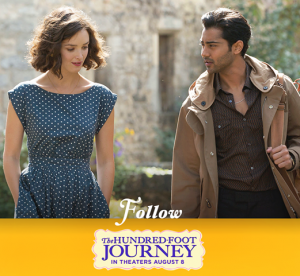 Journey might be a bit too saccharine sweet and for some. It is light and fluffy like an artfully crafted pastry. The film lacks any real surprises or grit, but it strikes you right in the heart. It has a great deal of passionate depth, so any of its rosiness is easily forgiven. The film’s dichotomy of flavors, lifestyles, personalities stew together like a perfectly balanced dish, all the elements in harmoniously coming together like a feast for the senses, nourishing the soul.

The One Hundred-Foot Journey is a Walt Disney release and opens in theaters August 8. Watch the trailer.