Last week the Grammy Foundation, in collaboration with the Ford Motor Company, presented the sixth annual “Grammy in the Schools Live!” experience at Club Nokia. 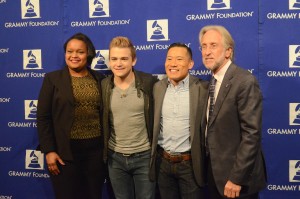 The show was created to celebrate future music professionals and featured more than 400 students from the greater Los Angeles Area with a special guest performance from five-time Grammy nominated country artist Hunter Hayes. All of the students involved had also participated in the  Foundation’s Grammy Camp, a basic training program which is a one-day event that brings top music industry professionals together with high school students to raise awareness about careers in music.

“We give kids some real-world experience and a line of sight as to what a career in music looks like, so they can have a direction of where to go in college and what to expect when they get out,” said Scott Goldman, Vice President of the Grammy Foundation.

To kick the festivities off, alumni from last year’s Los Angeles based camp performed  songs they had written during last summer’s week long session. They were followed by a performance by the camp’s Jazz Session featuring current high school students who had only practiced for less than a day prior to coming on stage. Finishing off the nigth was a rousing performance by the camp’s choir consisting of eight angelic voices bringing new life to old classics such as Tower of Power’s “Soul With a Capital ‘S’”. All of the students could not have performed as well as they did had it not been for the hard work and dedication of a music teacher during their life.

That is why the Grammy Foundation and The Recording Academy created a special Music Educator Award last year to honor educators who make a lasting impact on students and demonstrate a commitment to keeping music education in the curriculum. This year’s recipient is Jared Cassedy of Windham High School in Windham, N.J., a band director who will allow any student who wants to play an instrument into his band, beating out over 7,000 candidates from across the country. 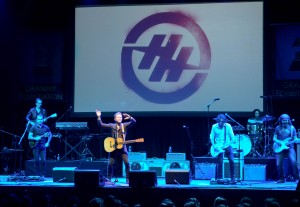 When asked what he gets from teaching music to the youth, Cassedy responded, “They are so excited to be part of a program that is bigger than just the individual. It’s the sharing and celebration of music and the intensity and excitement in their eyes every day that keeps me going.”

Hayes finished off the evening with a solid performance, but he briefly expressed his thoughts on the student’s before the show, “I’m so happy they are getting the recognition that they absolutely deserve…I love their passion and commitment to doing something different.”