I LOVE THE SUN-ALBUM REVIEW

The arts, and the people who are drawn to them, have a tendency to be night activities and night owls. It’s not a cliche, if it’s true. O.K. fine. That’s not true but, still–it is accurate. That’s why most gigs happen at night.

As a writer, my best work tends to come when the night is blackest and the environment is at its stillest. This is probably why I’m writing this in the daytime. In the sun. This is the review of I Love The Sun after all, the debut EP of musician Mike Weiss.

The title track, “I Love The Sun”, opens the album in a Maroon 5-Songs about Jane kind of rhetoric, in which Weiss isn’t so much making a statement about the life bearing sun, but more of an ode to the sunshine of Los Angeles after you’ve been up all night. It has promising riffs and a funk-tiffied feel to it-a la Remy Shand-but with its straight forward lyrics , that can be less than stellar, take you out of the musicianship of an otherwise, extremely danceable song.

It is apparent early, that songwriting is not the strong suit of this album as a whole. Which kind of takes you out of everything but, it’s pop right? Lyrics be damned.

The second track, “Words In My Head”, was the most interesting song on the album. If there is an out of nowhere hit, this is it! The melody and its synthesized counterpoints, along with the subtle accentuations of instruments floating in the background, make it a fun little beat. It has  breaks perfectly placed, that allow a doubled up chorus which help you forget the traditional-and done to death-song structure of Verse-Chorus, Verse-Chorus. Overall, it has a very Panic! feel to it, but nothing excessively mimicked. Fun tune. Plus, the lyrics on this one make an appearance in a straight forward fashion too, but there is a little more substance to them.

Speaking of straightforward, the third song on this EP is called “Love”. Guess what the song’s about? Go ‘head, just guess. This song opens with an acoustic riff paired with rippling cymbals and a harmony that feel Backstreetish? Daytime. This night owl is speechless in its description, but probably because I’m working during the day! It is a sweet song in its sentiment and approach, but there isn’t enough to it to make it stand out. Other than it sounding like something that should have been on TRL being sung by a group of men in their mid to late 20‘s to a gaggle of 13 year-olds as they danced in unison, while the audience held up signs and screamed in their screechy adolescent voices, nothing popped out, ironically. Which may not be such a bad thing?

The ending track to this EP, “Constant”, is the epitome of this album as a whole. It has very interesting, well executed instrumentation but, the lyrics are again, underwhelming (Today, is gonna be a day. Someday, ought to be today. I crave, funky foreplay). My wish for this song, with its musicianship and structure, was for it to be stripped down completely, to just the electric guitars being lightly supported by a bass, the marimba or xylophone (I think marimba), and some of those fiddles that are buried in the background. Sounds weird I know, but hear me out. This one could have been doubled on the sweetness and sentiment scale if the emotional output would have been controlled by the singers and the *teardrop instruments*, rather than the producer and the full band. Stop over producing!

The cast is sidereal in its support of an obviously talented front man. Overall, I Love The Sun, is chalk full of hard work, great musicianship, decent structure and a production team that is, at times, overused. The needs in these works are in the song writing department. Better lyrics and a self-defining sound would allow a talented musician like Mike Weiss to flourish exponentially, often.

The kid could be seriously great. The band has talent. They can play, that’s for sure (The bassist is a personal favorite), but the question begs to be asked though. Who is Mike Weiss? Maroon? Panic!? Backstreet? He’s definitely pop or country-ish, based on production, but what is this album? I don’t think Weiss has daytime talent, but this effort does feel daytime. Here’s hoping he can find his night. 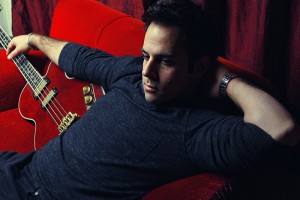 Then again, what do I know. I’m just an ex-musician (who didn’t make it) and turned to his first love of writing because the music deluded him in spirit, and lifestyle. Here’s to the hope Mike Weiss can turn his corner, and become great like he has the potential of being. Creating has no clock. Only we do.

*By the way, a teardrop instrument is an instrument that sounds like its crying, which in turn makes you want to cry. Not an industry term, just my term.*