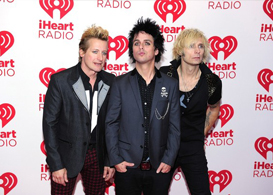 The 2012 iHeartRadio Music Festival took over Las Vegas this weekend bringing out some of the biggest names in the music industry. While everything may not have run as smoothly as expected it was, without a doubt, one of this summer’s more interesting festivals.

Most of this has to do with Green Day’s now notorious set that was purportedly cut short by management. Reports say that the show was running about 25 minutes behind schedule and rather than simply go over, like most concerts do, the management ended the band’s set early. Armstrong then freaked out on stage, swearing repeatedly into the microphone before smashing his guitar and stomping off stage.

Concerts never run on schedule, especially at a festival, anyone that has ever attended one knows that. Green Day has always and will always put the fans before management. Armstrong made that clear during their Lollapalooza set a few years ago. Not giving the band the chance to play a full show can burn a lot of bridges in the punk rock community. However, a statement released by the band today to Rolling Sone Magazine stated that Billie Joel Armstrong is seeking treatment for substance abuse and “we would like everyone to know that our set was not cut short by Clear Channel and to apologize to those we offended at the iHeart Radio Fesival in Las Vegas.”

Controversy aside, like many other festivals, execution can be a problem. The lineup for the festival is amazing but having them play back-to-back on a single stage can be counterproductive. Those that like Jason Aldean probably won’t like Lil Wayne, so why put them so close to each other? Spreading things out a bit would allow for longer sets and more specialized audiences.

Of course the festival had plenty of other surprises in store for the audience. Having Prince sing a duet with the always-amazing Mary J. Blige was a monumental idea. The same can be said for the Pitbull, Enrique Iglesias duet at the end of Iglesias set. The two have an amazing chemistry and that really comes through in their music. The rest of the line up included  No Doubt, Miranda Lambert, Usher, Bon Jovi, Pink, Linkin Park, Deadmau5, Aerosmith, Taylor Swift and more.

Las Vegas really is the perfect place to have a music festival. The acoustics on the stages in all of the casinos are top notch and all of the venues are made for huge audiences.

The iHeartRadio Music Festival is still relatively new and while it does have some kinks to work out each year it continues to get better and better. Their strategy of bringing out just headliners rather than filling out the day with lesser-known acts is almost unheard of in on the festival circuit. Allowing fans to see the top names in the industry with a full stage show accompanying them is a rarity in music festivals and one not to be missed!