Immerse Yourself in Terror at WonderCon

Though off-site events, including rides, games, and activations are a usual for San Diego Comic-Con, the mothership of pop-culture conventions, it appears both WonderCon and AMC were excited to branch out this sister-convention with a multi-sensory experience of AMC’s The Terror.

Located in front of the Grand Plaza of the Anaheim Convention Center, essentially creating the entrance to the entire shebang, badge holders were ushered on a shipping container. The doors were then closed and throughout the interrior clips introducing the speculative results of the 1845 Artic expedition, following the perils of the Royal British Navy Crew played. 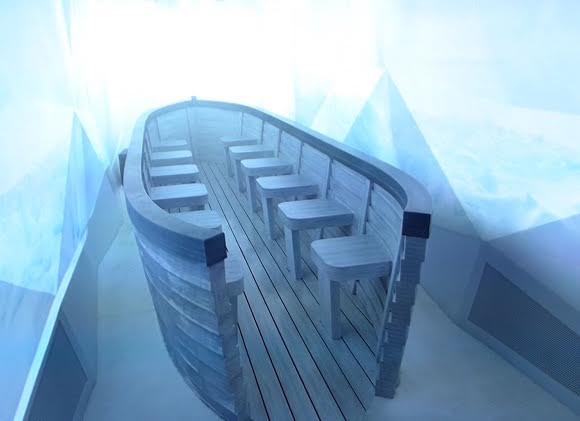 Once the intro was complete, the 12 guests were ushered onto a small boat hidden behind the screen. Seated in the vessel, we were given a moment to adjust to our new surroundings, which were made to look like icebergs. Completing the realism of the experience was the fact that snow was shot through vents onto attendees. During the unusually cold March 24, 2018 Saturday morning in Anaheim when I went on, it honestly wasn’t hard to imagine myself plopped into the middle of a frozen tundra. With lights flashing and snow falling, everyone began to feel the terror the crew may have felt, as more shots from the show played.

While visitors who waited in line more than 30 minutes may have felt cheated by the experience, especially after needing to sign a waiver, the marketing tool certainly worked in both branching out WonderCon and getting audiences to tune into the new show. The previews and sneak peaks that were featured depicted peril, suspense, and dynamic visual effects.

The heartbreaking 10-episode series begins with a two-hour premiere on Monday, March 26 at 9:00 P.M. ET/PT on AMC.