THE IMPACT OF ROGER EBERT: LIFE ITSELF REVIEW AND Q & A

As a kid growing up in the late 1980s and 1990s, whenever a new movie would come out, I remember constantly hearing the phrase “Siskel and Ebert give it two thumbs up!” If the movie critic duo didn’t endorse a film with their trademark thumbs up, it didn’t seem like the movie would fly.

That was the impact that Gene Siskel and Roger Ebert had on society as the nation’s most influential movie critics. So when I was given the opportunity to screen and review Steve James’ Life Itself, a documentary about the life of Roger Ebert, for Press Pass LA, it was a chance I couldn’t pass up!

Going into the movie, I had no idea what to expect; I had no prior knowledge of Ebert’s life other than he was a renowned movie critic who had a show with Siskel in the early ‘90s and that he had recently passed due to thyroid cancer. Life Itself subsequently filled me in on the other aspects of Roger’s life and career that I would have otherwise missed.

The film starts off giving a glimpse into Roger’s early childhood. In his younger days, he was portrayed as an arrogant man who struggled with his demons as an alcoholic. However, an anecdote about his days as the editor-in-chief of his college newspaper proves that there was a big heart underneath the contrary. It’s no surprise that the talented journalist rose to fame, shortly thereafter writing for the Chicago Sun-Times and becoming their movie critic, leading to his most popular gig: his show Sneak Previews with long-time rival Gene Siskel. The film captures the end of his battle with thyroid cancer, with majority of the footage taking place in his hospital room until his passing in 2013.

One of the most entertaining aspects of the film was seeing the dynamic between Roger and Gene, particularly when the camera stopped rolling for TV. It was surprising to see the animosity the duo had between them. Celebrities these days may have Twitter feuds and “throw shade” at one another, but Roger and Gene did it best. They often went far – too far at times – to try to convince the other that their point-of-view was the most correct. The lengths they would go to one-up the other left viewers in hysterics.

The film boasts a number of interviews from Ebert’s nearest and dearest, including his wife, Chaz Ebert. His marriage to Chaz was without a doubt one of his greatest feats – Chaz softened Roger up and many credit the change in him to her. One who can attest to that fact is Marlene, Gene’s wife. In her first ever on camera interview, she provides a lot of behind-the-scenes anecdotes and a candid account of Roger and Gene’s relationship.

Life Itself is a wonderful tribute to the late movie critic and is as top-notch as his highest-rated films. The only criticism I have for the movie is that I would have loved to see or even hear a quick mention of Richard Roeper (Roger’s co-host after Gene’s passing), but nonetheless the film is nothing short of a brilliant documentary that is a must-see for any movie lover or aspiring movie critic. Siskel and Ebert would undoubtedly give this movie two thumbs up! 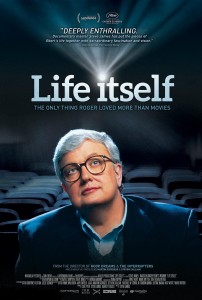 Press Pass LA was also invited to the Life Itself press day last week, where director Steve James and Chaz Ebert sat down to talk about the film. Chaz Ebert is exactly what you see onscreen and you are immediately drawn to exactly it is that apparently changed Roger for the better. She is a calming force of nature and she speaks so passionately about her late husband and the legacy he left behind. Despite his rivalry and competition with Gene, Chaz told a story that was previously unbeknownst that is very telling of Roger’s relationship with Gene.

“There was one time when Gene’s job was in peril and Roger went to his newspaper to make a place for Gene just in case Gene lost his job,” she said. “I’d never known that.”

Another thing not many may know is that Roger wrote a memoir, which Steve James used as a guide for the documentary. Many of the interview subjects Steve approached had their own chapters in the memoir, including good friend filmmaker Martin Scorsese. However, one of the biggest interviews in the movie, he said, was Marlene, Gene’s wife, who had never spoken publicly before this.

Steve also included that in making the documentary, filming took a turn when Roger’s health was failing, as he thought and believed that he would get better. Making the movie, he’s come to realize that it’s not just a movie about how you live your life.

Life Itself opens in theaters, Video On Demand and on iTunes on July 4.