In A Valley of Violence An Uneven Lesson in Minimalism

In A Valley of Violence might be the dullest western ever made. This goes totally contradictory to its marketing which pitches it
as a wild, intense ride.

There are shades of greatness in Valley of Violence but they are too few and far between. Director Ti West seems to have spent his entire budget locking down Ethan Hawke and John Travolta, making the rest of the production look like it was made by a film school student with a hard on for Quentin Tarantino films. The core cast is good but there’s hardly any meat on the bare bones story.

Ethan Hawke plays Paul, a soldier on the run after the Civil War that just wants to be left alone. Together with his dog they roam the Old West staying out of everyone’s way. That is until Paul gets into a fight in a saloon with Gilly (James Ransome) and is forced into a fight to the death after they kill his dog. This would be a fantastic plot if it hadn’t already been done in John Wick a few years earlier.

Like Wick, Hawke’s lone drifter is far more dangerous than he seems. After tragedy strikes he vows his revenge on Gilly, his father the sheriff (John Travolta) and the rest of his posse. Picking them off isn’t all that hard to do because, quite literally, they are the only people that live in the town. It is hard to tell if West was aiming for authenticity or just couldn’t afford to hire extras but the town seems to consist solely of the characters essential to the story. 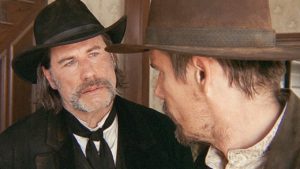 Not even John Travolta and Ethan Hawke can save In A Valley of Violence.

Once things get moving and Hawke lets loose there’s plenty of fun to be had in the movie, it is just hard to get invested in such poorly written characters. Both Hawke and Travolta are fantastic actors and it is kind of nice to see them trying different roles for once but there’s not enough there to really care who lives and who dies. Gilly’s goons get the short end of the stick as walking clichés just waiting to get picked off by Hawke. The best interactions come from Hawke and Travolta, the few times they share the screen, and even then that ends up being anticlimactic.

The film can’t seem to decide on a tone so it plays it broad and tries them all. While Hawke is in a revenge movie Travolta seems to think he’s in Blazing Saddles. The big gun battle ends up being on the most unintentionally hilarious scenes put to screen this year.

This is a movie with such a limited scope it is actually begging to be seen on the small screen. The big screen actually robs it of some of its tension because the audience can feel the lack of production value in each scene. If ever there was a movie made to be seen on Netflix, this is it.