IN THE HUDDLE WITH OMAR MILLER

If you’re looking to build a great team, make sure you have Omar Miller on your side.

The veteran actor has made a name for himself on shows like CSI: Miami and Eleventh Hour as well as movies like 8 Mile and Homefront. This summer takes center stage once again on HBO’s hottest new show, Ballers. 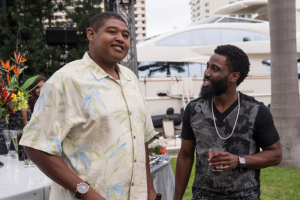 Miller brings retired football player Charles Greane to life in the series as a man that used to be on top, trying to adjust to civilian life after years in the NFL. Though the show has only aired three episodes he has brought a lot of heart and soul to character making him a fan favorite.

Press Pass LA sat down Miller to talk about working with HBO, The Rock and what the future holds for him.

PPLA: You’re on HBO’s hottest new show Ballers, what attracted you to the series?

OM: Honestly, the fact that was it was HBO made me want to do it, they are like the senior class of cable TV shows now and that counts for a lot. I had been working with them early on in my career and I really enjoyed it so I knew I wanted to do it again.

That and the cast is great. I mean working with Dwayne is really amazing, he’s could not have been cooler to work with every day.

PPLA: It seems like there’s a lot of natural camaraderie between everyone the cast, at least when the cameras are rolling, is it like that in real life?

OM: Oh yeah! It’s a fun set to work on and it’s a fun place to be a part of. We get some crazy characters both on and off the show. We have a great mix of hungry young actors and veterans that makes for a great dynamic.

PPLA: What kind of research did you have to do for the role?

OM: I put it on myself to get out there and get to know a lot of retired professional athletes and see what their lives are like. It was pretty interesting to find out they had a dramatic drop off in confidence once they retired.

They go from being in the spotlight all the time to having to go back to living a normal life and that can be kind of traumatic. It’s not as traumatic as going to war but it can still be traumatic to transition from that kind of life into a normal one. It was very important to me to get that right when I played my character.

PPLA: Did you have to do any kind of training for the role?

OM: My guy is retired so they actually asked me to gain weight for the role. They’ve hinted that he might get back in the game but I don’t want to give away too much.

PPLA: You’ve done a fair amount of both TV and film, which do you prefer?

OM: With the way the industry is now cable TV is the most compelling medium going on right now. When I first started out I really wanted to do movies and I love the way they can tell a story in a two hour time frame but the studios just aren’t making as many movies anymore and TV is where it’s at, especially on a network like HBO.

Make sure to check out Ballers on HBO every Sunday this summer.