FROM INDIAN LAKES AT THE FONDA, INTERVIEW WITH FRONTMAN JOEY VANNUCCHI

From Indian Lakes played the Fonda Theatre in Los Angeles on August 8 to an extremely packed house. Excitement was in the air as fans squeezed their way to the front hoping to get as close as possible to the amazing sounds that emanated from the band.

From Indian Lakes was started in 2007 by singer/songwriter Joey Vannucchi. The band members include Justin Stanphill (guitar and vocals), Chris Kellogg (bass and vocals), Tohm Ifergan (drums), and Enrique Gutierrez (keys and vocals).

Their debut album, The Man With Wooden Legs was released in 2009 and was quickly followed up by a fan favorite, Acoustic EP, which Joey recorded and mixed in a home studio.  After a few years of writing, touring, and building their fan base, they released Able Bodies in November 2013, which become very popular among music industry, fans, and music bloggers. Absent Sounds is the band’s first album since signing to Triple Crown Records in 2013 and is the band’s first  self-produced album. It will be released October 7th.

Press Pass LA caught up with Joey Vannucchi after the show and he explained that their music has evolved a lot since the band first started out. “The old stuff is very amateur compared to the new stuff. Since then, I’ve been  able to really find my own sound. It’s really important as a musician to know your sound and get up their and do your own thing.”

The band really explores what it means to be alive throughout the album; “Sleeping Limbs,” is an echoing and ethereal song that asks, “What’s the point to this?” Meanwhile “Am I Alive,” uses sweet and lilting melodies to lift the mood.

Vannucchi  continued,“To certain extent it’s [the new album]  pretty abstract. People should interpret art in the way they choose to, even if it’s different from the way the artist feels. It’s fine…the album deals with life and death, but there is also a sort of lighter, more positive side to it.  I was trying to keep the sadness and all the ’emo’ vibes, but also trying to have some positive vibes that people who are sad can still mix well with.”

In regard to releasing the album with Triple Crown, Vannucchi  told us, “To me this album feels like finally sleeping at night, or the first sigh of relief after good news. With a label behind the band, it is a record that wasn’t constrained by time, or other things that usually get in the way of ones vision. I always felt like no matter what I did, being in a studio had to always be ‘Here’s a guitar and a drumset kid, you’ve got x amount of time,’ but this time it was about making the songs sound exactly like they did in my head, no matter how long it took. Having no regrets about an album is an incredible feeling.”

For information about where to see From Indian Lakes next, visit  www.fromindianlakes.com. You too will have no regrets. 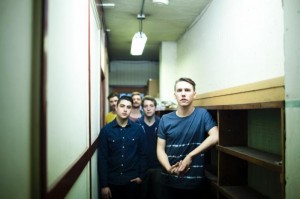